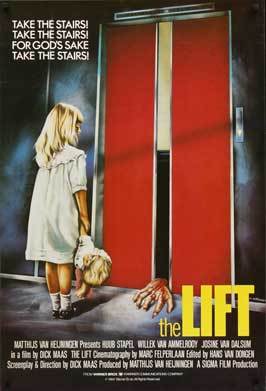 "One stormy night long ago, five people stepped through the door of an elevator and into a nightmare. That door is opening once again and this time, it's opening for you."
— Rod Serling, The Twilight Zone Tower of Terror
Advertisement:

Unlike the Elevator Action Sequence trope, where it's a fight scene in and around an Elevator, this is just an Elevator, that seems to be out to get you and anyone else that dares to go near it. This trope deals with elevators that apparently have a mind of their own. However, if the elevator fails due to explainable causes (bad maintenance, fire, earthquake), or because someone else damaged it, that's not an Evil Elevator, that's Elevator Failure.

Either the elevator wants to get you because it's vicious, or it has a cruel sense of humor.

The Scary, or 'Evil', version is where the elevator cable suddenly snaps without warning - plunging the riders down, either a few feet to terrify, or to their deaths. Sometimes the cable breaks while someone is inside the shaft, squishing the poor schmuck. Or if it doesn't fall, it makes ominous, creaking noises, or has a tendency to get stuck between floors - the odds of the last increases during an emergency situation.

When it's just mean, it jerk ups without warning, or drops. In very silly settings, this means the riders end up pinned to the ceiling, or flattened into a pancake. Often times, this kind of elevator has an operator that seems immune to the extreme forces that are apparently at work.

And of course, the doors closing can rip a man's arms off.

The main distinction between an evil and a mean elevator is that the evil is never played for comedy and usually results in someone dying, while the mean elevator leaves characters alive - but usually needing a change of clothes.

In Real Life, the modern-day elevator is safer than an escalator. However, if you are in a fictional setting, ride the elevator at your own risk.

The Hellevator is usually safe to ride, but the place it takes you to is decidedly evil and unsafe.

open/close all folders
Advertising
In this Indian commercial

for Chlormint gum, a pretty but vain young woman enters an elevator while proclaiming that one day she will be on posters everywhere. She finds a Chlormint gum packet on the floor and wonders why people like it so much. The elevator takes offense and its walls push in from both sides, squashing her flat. Her flattened, lifeless body is then hung on the walls as a poster.
Comic Books
Films — Live-Action
Gamebooks
Literature
Live-Action TV
Tabletop Games
Theme Parks
Video Games
Webcomics
Western Animation
Real Life