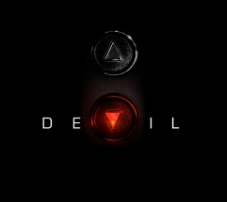 Devil is a 2010 film Inspired by… the novel And Then There Were None by Agatha Christie. It's the first part of The Night Chronicles trilogy, a series of films created and outlined (but neither written nor directed) by M. Night Shyamalan that deal with the supernatural in a modern-day urban setting. Advertisements for the film played up Shyamalan's involvement at first.

The story concerns a group of five people — an ill-tempered salesman (Geoffrey Arend), a celebutante (Bojana Novakovic), a grumpy old woman (Jenny O'Hara), a security guard (Bokeem Woodbine), and a stressed-out ex-marine (Logan Marshall-Green) — who, while stuck in an elevator, come face-to-face with demonic forces that want to torture and slaughter them one by one.

The second part of the trilogy, Reincarnate, was due in 2014, but has not materialized since.