Don't Make Me Destroy You 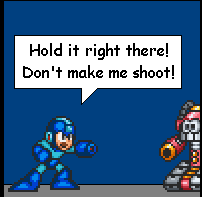 "There is no escape. Don't make me destroy you. (pause) Luke, you do not yet realize your importance. You have only begun to discover your power. Join me, and I will complete your training. And with our combined strength, we can end this destructive conflict and bring order to the galaxy."
— Darth Vader, Star Wars: Episode V — The Empire Strikes Back

Two characters conflict, and one is more powerful/more advantageously positioned than the other. This powerful character wants to avoid a fight, and so warns the other party against provoking a decisive clash because it's guaranteed that they will lose. This could be for any number of reasons:

Not to be confused with Why Did You Make Me Hit You? which is where the powerful character blames the victim for provoking a one-sided abuse. Compare You Wouldn't Like Me When I'm Angry which covers most situations where a powerful character is trying to deter an attack. Has a similar, but opposite effect to Give Me a Reason, where one character does want to hurt the other, and does want the provocation, and certainly will if given.

Alternative Title(s): Dont Make Me Do This