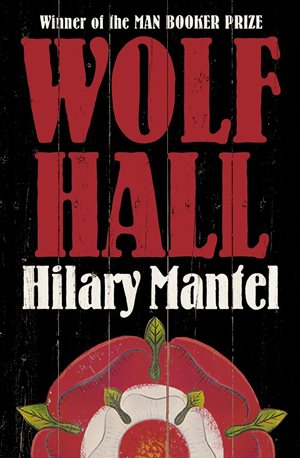 "You think you cannot keep breathing, but your ribcage has other ideas, rising and falling, emitting sighs. You must thrive in spite of yourself; and so that you may do it, God takes out your heart of flesh, and gives you a heart of stone."
— Bring Up The Bodies
Advertisement:

Wolf Hall is a novel by Hilary Mantel told from the perspective of Thomas Cromwell, one of Henry VIII's favourite advisors in the 1530s. It portrays him much more positively than most fictional depictions of Cromwell tend to, as a generally nice guy with extraordinary talents and a good sense of humour who just happens to occasionally do some morally ambiguous things to keep favour with his king. It won the 2009 Man Booker Prize, as did its sequel, Bring Up The Bodies, in 2012. A third book, The Mirror and the Light, was published in March 2020.

Probably a reasonable paperweight, if you're going to abuse it in such a way.

The first two books were adapted for the stage in 2013 as Wolf Hall Parts 1 & 2 and transferred to Broadway in 2015, where the plays were nominated for 8 Tony Awards, winning one (Best Costume Design). A television miniseries followed, also in 2015.

Alternative Title(s): Bring Up The Bodies, The Mirror And The Light