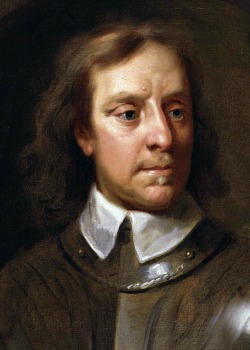 "No one rises high who knows not whither he is going."

Oliver Cromwell (April 26, 1599 – September 3, 1658) was an English military and political leader who became a Parliamentary General and then the Lord Protector of a nominal republic called the Commonwealth of England, Scotland and Ireland. He and his son remain the only 'commoners' to have been head of state in England and Scotland. As the following demonstrates, he is one of the most controversial figures in British history.

The Monty Python songnote Actually first written and performed by John Cleese in I'm Sorry I'll Read That Again on him is accurate, though some of its tone is contentious (such as him personally sending Colonel Pride, see below). Conversely the 1970 film Cromwell seriously exaggerates his importance in the run up to war, promotes him to Commander of the Parliamentary forces far too early, ignores the Second Civil War (the defining moment when he backed the army wanting to kill Charles) and ignores his exploits in Ireland, as well as having him laugh when parliament requests he become King. In the movie he considers the offer ridiculous, when in reality he gave it serious consideration (he eventually adopted many of the trappings and ceremonies of monarchy, becoming a king in all but name). It also gets very pro-Cromwell in its last few minutes, saying Britain wouldn’t have democracy without him. It never addresses the fact that people hated him so much that they dug up his corpse and beheaded it.note Although that was mainly Charles II having a grudge against the people who had his father killed. In the 2003 film To Kill A King he is portrayed as a Robespierre-like idealist-turned-dictator, committed to republican ideas and popular sovereignty; he is also played by Tim Roth which contrasts with the historical image of Cromwell being a large and imposing man. The 2008 British drama The Devil's Whore, where he is played by The Wire's Dominic West, also somewhat romanticises Cromwell, making him far more conflicted and angsty than history paints him.

Despite what is often assumed, Cromwell was never much of a revolutionary. His original intentions (as well of those of many Parliamentarians) was to bring about a compromise similar to that of the later 1689 Bill of Rights whereby a limited monarchy would rule in conjunction with an established Parliament. It was both Charles' refusal to accept any limits on his power and increasingly radical sentiment amongst the Parliamentary movement that changed his mind.

British politicians and the British people themselves tend to romanticize Oliver Cromwell as the champion of freedom and democracy against a cruel and totalitarian monarchy. His statue still occupies pride of place outside the Houses of Parliament and in 2002 he was voted 10th place in a poll of the 100 Greatest Britons. His posthumous vindication is relatively recent, though. Until the 19th century he was considered, even by Whigs and radicals, as an extremist and dictator. It wasn't until later that both the man and the historical and political forces that drove him were re-assessed.

Outside of England, his legacy remains controversial... at best. The Irish largely remember Cromwell as a really evil bastard who tried to starve and slaughter as many of them as possible. The Scots, at least those who look with scepticism upon their fanatical Puritan brethren, remember him as a man who despite being a fanatical Puritan himself thought the Scottish Presbyterians were really taking it all a bit far. "I beseech you by the bowels of Christ," he wrote to the General Assembly, "think ye it possible ye may be mistaken."

Oliver Cromwell was probably one of the most brilliant soldiers and Generals that the British Isles have ever produced. He had no previous military experience, but during the Civil War he quickly proved his tactical genius. His reputation grew as he won battle after battle, and soon he was the most powerful man in Parliament.

When the Scots invaded (in support of Charles this time) in 1648 Cromwell crushed the revolts and finally accepted the demands of the Army that Charles could not be dealt with in any other way than being executed (prior to the outbreak of war again in 1648 Cromwell and the fellow 'Grandees' of the army had wanted an accommodation with Charles, albeit a harsh one); with the majority of the Parliament against this, Colonel Pridenote who may have acted on his own or on orders from some of the army leadership (with his Regiment of Foot) purged the House of Commons of everyone but Independent minded Puritans. This left behind the Rump Parliament, which then proceeded with the trial and execution. Cromwell arrived the night of the Purge, but his actions thereafter seem to suggest he was not the ringleader (he worked very hard to reverse a lot of the damage done by the Purge and reach a compromise with moderates), certainly not for the most revolutionary of actions taken thereafter, with Ireton being far more central. Cromwell was still not in charge and was sent to Ireland by the Rump Parliament to put an end to the revolt which had begun in 1641.

The idea was to drive the Irish "to hell or Connaught". Thousands of civilians were put to death and others were deported (to Barbados). There were some really horrific atrocities; at Drogheda women and children sheltering in a Church were roasted to death when Cromwell's forces set fire to it, and Cromwell's men were told to massacre Irish Catholic priests. That many Irish still hate Cromwell is quite justified - he tried to exterminate them. Or to be more precise (if he had truly wanted to exterminate them, he could have) he intended to reduce them utterly to the point of total submission and remove any chance of opposition. As Blair Worden put it so well, "All historians mourn these dreadful massacres; all equally agree that Cromwell's attitude towards the Irishmen he slaughtered was no different from that of most of his countrymen". With the Three Kingdoms Wars lasting longer in Ireland continuously than the other regions (starting in 1641 - meaning a great many of the deaths are not attributable to Cromwell), it is estimated almost 40% of the population died.

After crushing the Scots at Dunbar and Worcester (September 3rd 1651 and 1652 respectively) Cromwell, now head of the army (he hadn't been at the time of the Purge) grew unhappy at the lack of progress of the Rump and dismissed them by force. He set up a religious assembly to run the country which failed to effectively work together and dismissed itself to be replaced by the Protectorate, a pseudo-monarchical system, in 1653. Many of his civilian supporters wanted a full monarchy: he was offered the crown by Parliament more than once but refused because of Army opposition and religious conviction, though he did consider it. His rule was peaceful in comparison to the Civil War years and the economy started to grow; England (dominating the rest of the British Isles) was regarded as powerful thanks to successes against the Dutch and Spanish, but was burdened by high costs for maintaining the army and continuing political tensions, not least because Parliament largely answered to the Lord Protector (rather than the other way around, as was supposed to be the case) and the increasing power of the Puritan (i.e. independent Protestant) religious factions, the latter being most notorious during the rule of the Major Generals when Cromwell assigned a military political commander to each region of the Commonwealth, essentially creating a form of military dictatorship.

In an odd coincidence, Cromwell (and later William III, see below) lived in the house that would become Number 10 Downing Street, much later to become the official residence of the British Prime Minister - a post drawn from the Parliament which only gained such power because of Cromwell's actions.

Cromwell's reign was full of contrasts. He seemed undecided as to whether he should present himself as merely the head of a republican government or as a de facto monarch. It is also hard to determine whether he was a power-hungry dictator or whether he was a sincere republican who felt England needed strong rule to rebuild its institutions until Parliament could rule in its own right. Compare to Julius Caesar or Vladimir Lenin or Maximilien Robespierre or Adolf Hitler. Another interesting comparison is to Simón Bolívar, who shows possibly the most similar pattern to Cromwell.

Cromwell is also remembered for re-admitting Jews to England, 366 years after they had been expelled from the kingdom by Edward I in 1290.

Works of fiction that depict Cromwell include:

Troping is banned! It is sinful!