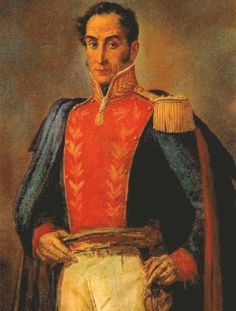 Bolívar was a scion of one of the oldest, richest, and most respected families of criollos (i.e. colonial-born Whites) in colonial Venezuela. His parents died young, and he inherited the bulk of the family fortune. As a rich criollo, he went to Europe for his education as a teenager, where he saw firsthand the corruption of the Spanish court. This disgusted him and instilled in him a dislike of the Spanish and intense pride in his heritage in the New World.

This pride, combined with his liberal education in the ideals of the American and French Revolutions, he decided to win independence for much of Spanish South America—or die trying. Bear in mind, he did this at a time that when Napoléon Bonaparte invaded Spain, most of Spain's South American colonies declared they were still loyal to the Spanish king and set up temporary governments. The idea of independence was considered lunacy—and being that Spanish America was a slaveholding society and the Haitian Revolution had just happened, resulting in the complete abolition of slavery and the deaths of thousands of Whites, Whites, especially rich Whites, (like the wealthy criollos like Bolívar himself who dominated the social and economic landscape of the colonies), were generally a little leery at best of talk of independence unless it came with a lot of strings attached.

Bolívar, young radical that he was, didn't really care about that (although his family's wealth was heavily based on slaves, and he continued to hold slaves and kind of ignore Venezuela's Black and mixed-race majority for an unhealthily long time), but even when things in Europe got bad enough that the criollos decided that an independent republic was the way to go, they mostly ignored Bolívar as a young hothead with more money and ideas than sense. When Venezuela first tried to declare independence, he led the new republic's first quasi-diplomatic mission to Britain (a key potential ally)—but only because he was so rich, he could pay all of the mission's expenses with his own personal funds. When the mission ended and he got back to Caracas, he went back to being some big-mouthed rich kid who didn't know what he was talking about and didn't have any kind of official position.

But then the fighting started. Although at first just a colonel, he acquitted himself rather well in combat despite the rather awful quality of the "Patriot" troops (with one mistake that's important but not worth going into here). When the royalists destroyed Venezuela's first attempt at a republic, he escaped (with a sojourn in the Caribbean) to what is now Colombia, where he gathered up an army that ended up taking over most of western Venezuela.

The history after this point gets really complicated, but simply put, he then essentially did to the lands that are now the countries of Venezuela, Colombia, Panama, Ecuador, Peru, and Bolivia (which was named in his honor in 1825) what George Washington only did to one country. It was a very bloody war for independence, with a lot of rather nasty things done by both sides. Still, Bolívar was a great general who managed to keep the war raging and won a number of impressive victories.

Bolívar thought that a republic like the one in the United States would not end well in the brutal world of South America (he once even said that the people suffered from "triple yoke of ignorance, tyranny, and vice").note To be fair, the British colonies in North America were allowed to essentially rule themselves and elect their own rulers, something the Spanish colonies never experienced, and that is why he thought it was better suited up there. This wasn't to say he was a despot or autocrat, however; his model was the British system of King, Lords, and Commons, with the King replaced with an elected executive president for life and the Lords replaced with a hereditary Senate. (In that sense, he was strikingly similar to Alexander Hamilton, who had similar ideas for the United States.) He was also not a fan of federalism, for the same reasons, and advocated strong powers for the central government (again like Hamilton, although more extremenote Hamilton was willing to accept federalism in the United States, if only because the country was so vast and the states were already well established as governing units by 1787. He merely advocated for the federal government to be as powerful as possible. Bolívar wanted unitary government for his Gran Colombia, even though it was almost as big as the early United States—indeed, Gran Colombia was larger than the US of Hamilton's day by about 150,000 square miles—and the divisions between Venezuela, New Granada (what is now Colombia), and the Audiencia of Quito (now Ecuador) were even older and more deeply rooted than the ones among the U.S. states.).

Bolivar was President of a union of much of these colonies known as Gran Colombia from 1819 until 1830. At one point he was declared dictator for life, but it seems he never intended to actually rule absolutely for his entire life. At most, he wanted to have a life presidency with expansive but nevertheless not limitless powers—that is, he wanted to be King George, not Emperor Napoleon. The comparison to Napoleon is significant: He hated what Napoleon had done to the First French Republic. During his pre-revolution jaunt in Europe as a bereaved young widower, Bolívar had been in Paris during Napoleon's coronation in 1804, and had pointedly locked himself in his room and stayed away from the coronation festivities. Had Bolívar wanted to become a monarch, he probably could have—but he never wanted to, and so he never did.

Indeed, over the course of his career he was a bit like Oliver Cromwell, perpetually finding himself in power, trying to create a civilian constitutional government he could hand things over to, handing power to that government, seeing the new order torn apart by competing factions less interested than him in maintaining the new regime, and ultimately being asked to retake power to restore stability. In the end, declaring the famous quote "all who served the revolution have plowed the sea" to express his disappointment on the result of his project, he resigned several months before his death at the relatively young age of 47, from what appears to have been tuberculosis.

The new country, spread over a wide area and separated by geographical features like the Andes Mountains, was held together very loosely during Bolívar's lifetime, and it fell apart not long after he died. Some people would be surprised by how ahead of his time Bolívar was on some issues. Most prominently, he was a fairly early supporter of the abolition of slavery in Spanish-speaking South America, even though he came from a slaveholder family (compared to, say, Thomas Jefferson). Most of his reasons were political, though, as promising the end of slavery would bring the large African-descended population of Venezuela to his side, as well as guaranteeing useful support from Haiti;note In two of his several periods of exile, Bolívar took refuge in Haiti. His hosts agreed to support his struggle with arms, ships, and money if he promised to fight for the abolition of slavery in the lands he freed. He kept his word.) he was still very much a criollo of his time in terms of race, spousing in private some less pleasant post-Enlightenment views on black and indigenous people that tend to be decorously swept aside in most portrayals on him.note Bolívar did try to gain the support of some black and indigenous communities, as those were often in the Royalist side of the war (and he had himself a black nanny, Hipólita, whom he very much loved), but he was very convinced that only whites were capable to govern. In his private letters, he derided the other races as inherently brutish and untrustworthy, which he would later conclude (such as in the famous "plowing the sea" letter) to be the very reason why the revolution he desired for the Americas ultimately failed. He also flirted with literal genocide to make an example, such as that of the Pastuso people, though this particular point was less by racial troubles and more because they were stubbornly Royalist and a constant thorn in his side during his final campaign to liberate Ecuador. That said, after he returned to Venezuela on a Haitian ship and armed with Haitian guns, he did free all of his slaves the minute he could get to the estate where most of these slaves lived. Bolívar also annoyed his fellow rich criollo by his insistence that some kind of slave liberation—however gradual—be written into the constitutions of every country he freed from Spanish rule (after the aforementioned stop in Haiti, that is). He also believed that the role of a government was only to protect the rights of its citizens.

Hugo Chávez believed that he was assassinated by traitors and had scientists dig up his remains and test him for arsenic poisoning. While they said it might have been possible that he had some traces of arsenic, there's little chance that he was poisoned.

He's pretty beloved throughout much of South America, where he is widely known as El Libertador ("the Liberator"). There are statues of him in just about every city in the area he helped free (and in London, which immensely appreciated Venezuela's favour during the time, being the only European country they liked). As mentioned earlier, Bolivia is named after him (as is Venezuela, now, technically), making him one of the few people in history to have the honor of being a country's namesake and the only person to be still alive when the naming took place.note Cecil Rhodes was alive when Rhodesia was named, but it was a British territory, and he died before it became an independent country There is a square named after him in every city of Venezuela, and the largest state in the country and its capital city (formerly known as Angosturanote Yes, as in the aromatic bitters

, which were invented around 1820 in the city by Dr. Johann Gottlieb Siegert, the surgeon-general of Bolívar's army, as a medicinal digestive aid for the troops. However, the unstable politics of Venezuela in the later 19th century led the Siegert family to decamp to the stability of British-controlled Trinidad, where the House of Angostura is based to this day.) also bear his name. Colombia has also named one of its departments after him, namely the one containing Cartagena (the country's major port on the Caribbean, was involved in several of Bolívar's famous campaigns).