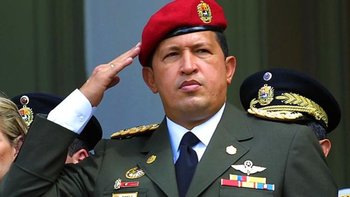 The face of Socialism, for better or worse.
"It wouldn't be weird if there was a civilization in Mars, but possibly capitalism arrived there; imperialism arrived and life ceased to exist on the planet."
— Hugo Chávez. Seriously.

Hugo Rafael Chávez Frias (28 July 1954 – 5 March 2013) was the president of Venezuela from 1999 until his death in 2013. A controversial figure known for his bombastic speeches, Chávez was the head of a socialist movement who wanted to implement what he called "Socialism of the 21st Century", which meant helping the poor in Venezuela, and stop the evil of capitalism.

At least, that's the short version. Let's expand that a little.

Born in a poor family, Hugo Chávez became Lieutenant Colonel, and was the leader of a socialist group on the Venezuelan army called "Bolivarian Revolutionary Movement 200", named after South American liberator Simón Bolívar. Disgusted by the politics of President Carlos Andrés Pérez, Chávez attempted to overthrow the government on two separate occasions in 1992. While the movement gained notoriety, both coups were quickly put down.

Chávez was allowed to appear on television to explain his actions, and many poor Venezuelans identified with his ideals. He was sent to prison but was vindicated in 1993 when Pérez was convicted in a massive corruption scandal. Chávez was pardoned by President Rafael Caldera in 1994 and soon entered politics, much to the latter's regret. His group became a legitimate party, the Fifth Republic Movement (MVR), and in 1998 he ran successfully for the presidency.

As president, Chávez encountered challenges both at home and abroad. From the get-go, he was controversial due to his mannerisms and fiery rhetoric. His efforts to tighten his hold on the state-run oil company in 2001 stirred up controversy and led to massive protests, headed by large parts of civil society but especially the business and worker unions, eventually finding himself removed from power briefly in April 2002 by military leaders (making the business union head Pedro Carmona Estanga president for just under 48 hours). The protests continued after his return to power, leading to a referendum on whether Chávez should remain president. The referendum vote was held in August 2004, and 58 percent of voters decided to let Chávez complete the term to which he'd been elected in 2000, although claims of unfair conditions in his favor marked the occasion.

During his government, Chávez created and expanded many social programs for the benefit of the poor, especially in education and health care. He also starred in a television program on national television named "Aló Presidente" (Hello Mister President), where he would do anything: speak, sing, etc. Sometimes he could go on for hours doing this.

His rule was still controversial, however. Chávez' government nationalized many private companies (including things like supermarkets), which is common practice when enacting a revolutionary socialist agenda. Anti-Chávez people argue that the nationalized companies went bankrupt due to mismanagement, needing subsidies to keep existing, causing public services to deteriorate and several basic products, like toilet paper, to become scarce. Further, they argue that a longstanding price control scheme caused capital flight, hyperinflation, and massive corruption. The oil industry also deteriorated due to a paradoxical combination of overreliance on oil revenues (which constituted over 80 percent of public revenue) and underinvestment in the country's oil infrastructure, due to his seizures driving away foreign expertise and capital, and him trying to turn the oil industry into a jobs program rather than a profitable enterprise. All this arguably made the economy grow worse.

Pro-Chávez people, on the other hand, argue that, while there certainly was some internal mismanagement by his administration, his government reduced wealth inequality somewhat, that Venezuela's economy was prosperous by the standards of the region under Chávez, and that severe sanctions imposed by the United States bear a considerable amount of responsibility for many of contemporary Venezuela's economic hardships. And even under Chávez (before the worst of the sanctions), relations with the United States were not exactly warm and fuzzy. Given the CIA's known history of backing coups in Latin America against left-wing governments (whether democratic or not), this didn't do wonders for political stability in the country.

Wherever one falls on the issue, Chávez was still popular, thanks in part to genuine progress against wealth inequality, illiteracy, and medical precarity. Chávez led Venezuela for nearly fifteen years against a political opposition that was, frankly, useless against him, and he would eagerly remind people of the dire straits the country was in a decade before and that it would happen again should the opposition win. During the 2005 parliamentary elections, the opposition abstained, citing the controversy around the 2004 referendum, and controlled the parliament completely. During the 2006 presidential election, Manuel Rosales, an uncharismatic man known for malapropers such as "we will improve insecurity", challenged him; coincidentally or not, Chávez won his biggest victory that year, carrying all 23 of Venezuela's states. Frequently, the opposition groups would become unable to form agreements and work together against Chávez in addition to their individual failings.

He became well-known internationally due to his statements against the United States, which was at the time waging war in Iraq, whose government he blamed (perhaps rightly, at least in part) for the coup against him, and who he repeatedly referred to as The Empire. He infamously called George W. Bush "the devil" and "Mister Danger", which was the name of a drunken, Evil Colonialist character in a Venezuelan novel. He proposed a reform to the then-current constitution in late 2007, which would have further enshrined socialism in the country's culture, but narrowly lost (this was his first electoral defeat). He didn't take this well at all, calling it a "shitty victory" for the opposition, and prompted him to tighten his commanding stance and practices ever since.

Chávez did some other things, like banning violent video games due to Mercenaries 2 having Venezuela as its setting and its president (who, ironically, was overthrown by a man more similar to Carmona than the man himself) as the main antagonist (not that it stopped the game from being sold through piracy or regular means), almost getting into a war with Colombia due to disputes with President Álvaro Uribe Vélez, supporting the Marxist terrorist group FARC in its war against the Colombian government, making the currency exchange rate illegal to mention, and many corruption scandals perpetrated by men who worked for him, among other things. Again, It's a Long Story.

Chávez, despite having cancer in 2012, decided to run for president for a fourth time and, shortly after winning, died, and left his vice president Nicolás Maduro to become his successor. Maduro maintained his policies, and modern-day Venezuela is in the midst of a prolonged economic crisis. How much of the blame should be pointed at Maduro's policies, at external sanctions on Venezuela, at the challenges a relatively impoverished petrostate faces in diversifying its industries (the oil dollar is prone to extreme fluctuations), or at some combination of the three, is a matter of intense debate.

And then, Chávez was reborn as a little bird in his hometown, singing beautifully to his successor. At least, according to Maduro. We seriously wish we were joking, but that too is Another Story for Another Time.

Chávez appears in the following works: