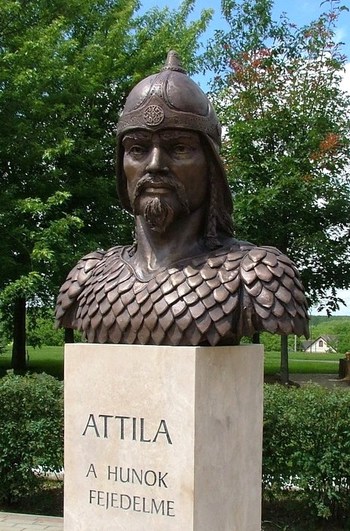 "Even a mass of federated nations could not endure the sight of the Huns. I am not deceived in the issue; here is the field so many victories have promised us. I shall hurl the first spear at the foe. If any can stand at rest while Attila fights, he is a dead man."note Image

◊, from Wikimedia Commons
"I know nothing of the mother of Attila, but I rather suspect that she spoilt the little darling, who subsequently found the world irritating because it sometimes resisted his whims."
— Bertrand Russell, Power: A New Social Analysis (1938)
Advertisement:

Attila was the ruler of the Huns from 434 until his death in 453.note He shared kingship with his brother Bleda until 447, when Bleda died in a Hunting "Accident" He was leader of the Hunnic Empire, which stretched from the Ural River to the Rhine River and from the Danube River to the Baltic Sea. During his reign he was one of the most feared enemies of the The Roman Empire both East and West, earning him the title, "The Scourge of God"; while he wasn't known as this in his own time, a near-contemporary description does ascribe the honorific "scourge of all lands" and the "terror of mankind". Despite all of these premises, he is regarded as a national hero in Hungary; many streets in the country (10 of which in the capital Budapest) are named after him, and Attila itself is a common male first name.

Depending on which account you follow, he used either the pretext of the Emperor Honorius' sister, Honoria, sending him her signet ring and a plea to save her from a loveless marriage to some Senator, with Attila genuinely or willfully interpreting this as a wedding proposal and demanding half the Roman Empire as a dowry, or a dispute over the inheritance of the Frankish throne to try and conquer Roman Gaul (modern France), crossing the Rhine in 451 and raiding northern Gaul before being held up at Aurelianum (modern Orléans) and forced out of the province following the Battle of the Catalaunian Plains

He subsequently invaded the Italian peninsula, devastating its northern provinces and supposedly expelling the residents of Aquileia, who went on to found the floating city of Venice, but was unable to take Rome, being turned away by an embassy comprising Pope Leo I and two other emissaries; what they said to him remains a Riddle for the Ages.note This proved to be All for Nothing a year later when Geiseric and the Vandals succeeded in storming Rome, sacking it far worse than Alaric and the Visigoths had half a century prior. He planned for further campaigns against the Romans but died in 453 on the night of his wedding to the Gothic lady Hildico, either from his usual Nosebleed accidentally flowing down into his windpipe, or by her hand. The Hunnic state fell apart in less than a year after that due to squabbles amongst his sons as well as their mistreatment of their subject peoples; an uprising of the Gepids and the death of his eldest son Ellac at the Battle of Nedao in 454 broke Hunnic hegemony on the Roman borderlands forever.

There is no universally accepted image of Attila, although he is normally depicted as a large hairy barbarian similar in appearance to Genghis Khan, another horseback archer barbarian conqueror. Even the ethno-linguistic identity of the Huns he ruled remains under hot debate to this day, with the three known recorded "Hunnic" words being Indo-European and the vast majority of Hunnic names either being Turkic or Germanic.note This isn't even getting into other people called Huns in antiquity, like the White Huns/Hephthalites

who menaced India, and the North Caucasian Huns.

Among peoples who claim to be his descendants were the Bulgar khans, predecessors of modern Bulgaria, through his son Ernak; Hungary's first dynasty, the Árpáds, through his more mythical son Csaba (the Hungarian minority in Romania known as Székelys claimed to outright be Huns during the Middle Ages); and Turkey more generally through their Turkic heritage, although his branch of Turkic is represented nowadays only by the Chuvash people resident in Russia, hence his appearance in Civilization featuring that language.

His impact on popular culture is considerable—in fact, before World War II made Those Wacky Nazis the absolute shorthand for "evil", Attila the Hun was one of the most-invoked "historical villains" (along with Biblical bad guys, like the Nepharious Pharaoh from the Book of Exodus, and Pontius Pilate and Judas Iscariot from The Four Gospels) for such comparisons. During World War I, the soldiers of Imperial Germany were widely referred to as "Huns", in reference to their supposed savagery as invoked by Kaiser Wilhelm II, who told the Germans being shipped off to quell the Boxer Rebellion to retaliate so severely that their renown would be akin to that of Attila's and no Chinese person would ever dare disrespect a German thereafter.

Tropes as portrayed in fiction, legend and history: