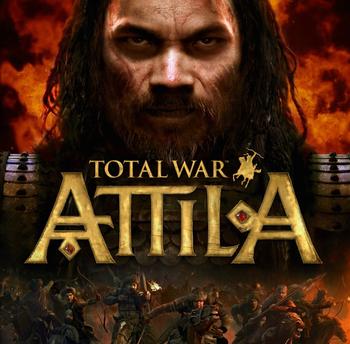 Your World Will Burn.
You built an empire beyond imagining: the pinnacle of human achievement and the envy of the world. Did you think it would last? The eternal city — that glorious monument to power, culture, and learning...but the old wolf lies wounded by jackals, circled by vultures, worried to death by a thousand, tiny, faceless mouths, brought low by your own arrogance. These are the death throes of Rome. The light of civilization dims and gutters. I leave such precious time left to hide your women, for your children to cry. Even at the moment of your final defeat, you will take no comfort in oblivion — for I am coming for you. I RIDE WITH A MILLION WARRIORS! I BRING THE END OF DAYS! I AM! THE SCOURGE! OF GOD!...And I will watch your world...burn.
—' Attila the Hun', announcement trailer
Advertisement:

Total War: Attila is a stand-alone game in the Total War saga that serves as a sequel to both Total War: Rome II and Rome: Total War's Barbarian Invasion expansion; it places the player in Late Antiquity, as the Western Roman Empire slowly dies and various Germanic tribes threaten the imperial borders, a new enemy arises from the steppes of the east, bent on destroying everything and everyone that stands in their way.

The player is able to, as with the original Barbarian Invasion, take control of one of the many barbarian tribes of the time, the mighty Sassanid Empire to the east, or The Roman Empire itself, either its prosperous Eastern half (what would be known in time as the Byzantine Empire), the dying Western half, or as the mighty Hun horde, led eventually by the titular Attila the Hun.

The game reintroduces the family tree note Eventually, the mechanic was also added to Rome II. and adds other features that focus on destruction and the apocalyptic nature of the time period, such as setting fire to entire cities and settlements on the battle map, ordinary people fighting side by side with your army against the invaders, diseases that will spawn more frequently and will kill both citizens and armies, and the ability to raze entire provinces, utterly destroying the city that was there. On top of all these, climate change will progressively reduce the fertility of many lands across the map.