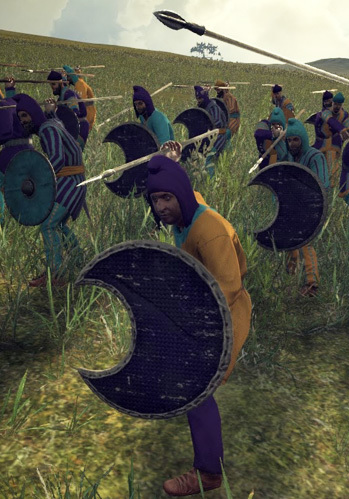 "It's not unlike a long-range kebab."
— Javelin description, Dungeons of Dredmor
Advertisement:

One of the oldest weapons of all humanity, Older Than Dirt, along with the wooden club, is the javelin. Short, light spears that can be simply sharp sticks (though really, a hard point makes them much more effective), javelins can be used in melee at a pinch, but are usually thrown. They differ from the Blade on a Stick in various ways: usually, while heavy spears and lances are melee weapons associated with guards, knights, and cool-headed, calm individuals, javelins are associated with speed, as they're lighter to carry than a spear, and provide hit-and-run skirmishers with the cheapest and simplest effective option. But there are important exceptions, most notably the Roman legions, who developed formidable heavy infantry tactics based on close-range use of heavy javelins followed up with sword and shield.

Javelins are thus favored by light cavalry and skirmishing infantry, who can use them instead of bows and arrows — javelins are more economical to make and easier to use, and can be thrown one-handed while the other hand holds a shield, though they lack the bow's range. (A well-equipped Horse Archer might also carry a couple of javelins, for closer-range work and as a backup to the bow.) The javelin is a very old weapon as well as being quite simple, so it's often associated with wild, primitive-looking cultures (though, again, the Romans provide a major counterexample). If a story takes place in a maritime setting then you may see its nautical cousin, the harpoon. In some stories, javelins will be coated in venom.

Sometimes certain powerful characters won't be satisfied with mere short spears and will show off by tossing very large spears around. In Video Games, there'll often be the trick of javelins returning to the thrower or magically respawning/reappearing in his or her hand. In mythology, javelins are often associated with lightning, with thunder gods throwing lightning bolts around as their human devotees throw javelins.

There is a weapon/device itself known as the javelin-thrower, spear-thrower, or atlatl, which uses leverage to increase the power and range of a thrown spear; users of these are also covered by this trope.

See also Blade on a Stick and Prongs of Poseidon, and Harpoon Gun for a high-tech version with aquatic associations. The victim of an especially powerful javelin attack may end up Impaled with Extreme Prejudice, though in truth it would take incredible strength to throw a weapon right through someone.