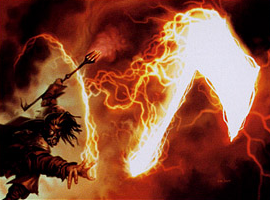 Ki Manipulation and Elemental Powers are cool, but what if you want something more appealing than the usual Kamehame Hadoken wave or Fireballs, Energy Balls or lightning? The answer is to give your attack a special form.

It can be anything, including weapons, objects, and animals. Usually it's strictly done for Rule of Cool or for characterize the user of said powers; for example, a bird-related character will make avian-shaped attacks. Dragons tend to be a popular choice too. It may overlap with Weapon of Choice in some cases of weapon-shaped attacks. This goes double if you're an Art Attacker that shapes things into beautiful pieces of art to be used as weapons, or at least if you have a side job as an artist.

Occasionally, the shape may serve some practical purpose. Shaping an attack into a sword or other sharp object may allow the user to cut things, for example. Other times, it may serve simply to cue the audience in on what the attack is trying to do. If for example the hero is up against a Heavily Armored Mook and needs to use a special Armor-Piercing Attack, the fact that the attack is in fact armor-piercing is much better communicated if the compositional energies take the form of a drill rather than an amorphous blob.

Don't confuse with Energy Weapon, which is usually perpetual while the "Shaped Attack" is only temporary. When used to create a weapon it becomes a form of Spontaneous Weapon Creation.