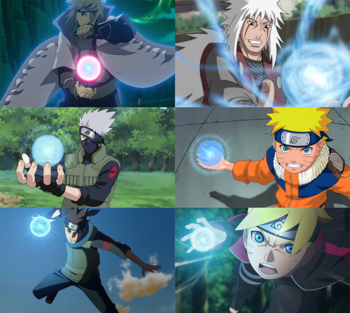 One of them will teach this to yet another person eventually.
"No! That's impossible! The only one who knows that technique is Goku! And Gohan. Aaaaand Master Roshi. And Krillin. And Yamcha. And me that one time I tried it just to see if I could—"
—Piccolo, Dragon Ball Z Abridged
Advertisement:

A technique amongst members of a similar group, family, school of fighting, etc. Characters who share signature moves often have pre-established lore with each other; it could be a family member inheriting the technique from another, it could be practitioners of the same martial art learning the move, or perhaps a character is inspired seeing another performing it and decided to create their own unique version.

The Hero will often learn their Signature Move from a teacher or family member, and perhaps put their own twist on the move that expands on it or differentiates it from its predecessors.

Seeing a character using the same technique as another can be used to mark a Wham Shot and subsequent big reveal as it establishes a connection between the two.

Common amongst Moveset Clones, who often have lore ties to their character of origin. Characters who experience Divergent Character Evolution can retain similar attacks while gaining their own unique techniques, further enforcing this trope.

A Sub-Trope of Signature Move. If each member of the group/family uses different types or versions of the same ability, it's Variant Power Copying. If at least one version is better than the previous, see Superior Successor. Compare Moveset Clone.