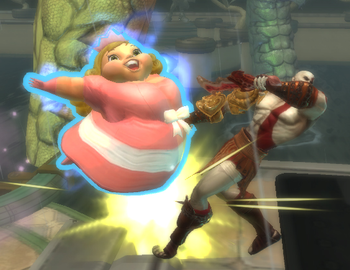 Yes, you are indeed seeing an obese princess fighting the God of War himself. We don't see anything wrong with that.
"I was a rodeo clown for six years. You're gonna hafta step it up, shorty!"
— Jan, Mr. Deeds
Advertisement:

They look wacky. They utilize slapstick in their attacks. They have a goofy voice. They run on Rule of Funny while their peers run on Rule of Cool. In spite of all this, they play just as well as the other fighters in the game. They aren't a Joke Character, they're a Fighting Clown, and they'll have you knock-knocked out cold before you can ask "who's there?"

Mind that a Fighting Clown does not necessarily need to be a literal clown; that said, this is not unheard of.

Many a Fighting Clown uses the art of Confusion Fu, and/or is an Improbable Weapon User.

Compare Lethal Joke Character, who seems mechanically weak but can deliver a thrashing. Similarly, compare Mechanically Unusual Fighter, whose gameplay mechanics tend to be their silly aspects as opposed to their appearances (although the two overlap nicely). Compare Campy Combat, whose fighting style is flamboyant but not necessarily comedic. See Beware the Silly Ones. Nothing to do with Monster Clown.

Not to be confused with Magical Clown, which is always about literal clowns.

Having been literally created to be a jester, Spinel uses her elastic physiology to toy with the Crystal Gems.

Having been literally created to be a jester, Spinel uses her elastic physiology to toy with the Crystal Gems.