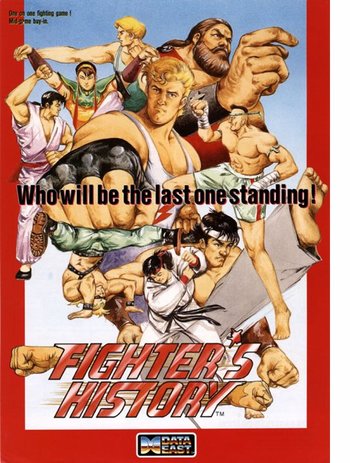 Fighter's History was a short-lived Fighting Game series by Data East. The first game was released in March 1993 on arcades. It also featured the protagonist of their 1987 platformer, Karnov, as a Final Boss.

Nevertheless, it is mainly remembered for being THE Street Fighter II ripoff Note (which is strange because, outside of the typical tropes found in most fighting games of the era, it really isn't that similar, aesthetically, to Street Fighter II). Capcom filed a lawsuit against them, but they lost, and the game was successful enough to get a port to Super Famicom and SNES the following year. 1994 also saw a sequel titled Fighter's History Dynamite (a.k.a. Karnov's Revenge, after the final boss) and a spin-off Super Famicom game titled Fighter's History: Mizoguchi Kiki Ippatsu!! Translation "Mizoguchi's Moment of Crisis!" No new entry to the series has been made since Data East filed for bankruptcy in 2003 aside from a Japan-only crossover with Fatal Fury for cellphones made by SNK.