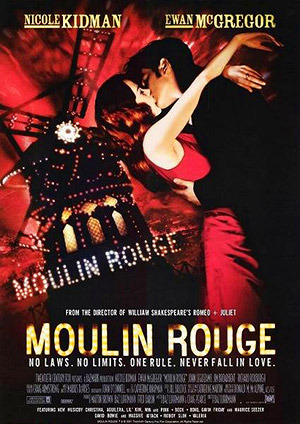 "Come what may, I will love you until my dying day."
— Christian and Satine
Advertisement:

Moulin Rouge! is a 2001 musical film, directed by Baz Luhrmann and starring Ewan McGregor and Nicole Kidman. The story is told through flashbacks from the point of view of Christian James (McGregor), a young Englishman writing the story of his doomed affair with the star of the eponymous Parisian nightclub.

Flashback to 1899 where Christian, an earnest young poet, has left his Victorian London home and his overbearing father in order to live an intellectual life amongst the Bohemian revolutionaries of Paris's bawdy, colorful Montmartre district. Soon after his arrival, an unconscious Argentinean falls through his roof, quickly joined by a dwarf dressed as a nun...or, as he introduces himself, Henri Marie Raymond de Toulouse-Lautrec Montfa, painter, actor, and Bohemian revolutionary extraordinaire. He, along with the Argentinean (narcoleptic, as it turns out) and the rest of their theater troupe are in the flat above, rehearsing their musical spectacle which will, of course, revolutionize the artistic world as they know it—provided, of course, that they receive the patronage of Harold Zidler, owner of the Moulin Rouge, the hottest nightclub-slash-brothel in Paris. The Moulin is soon to be converted into a theater in order to launch a new career for Zidler's "Sparkling Diamond", Satine (Kidman), the club's highest-paid courtesan and star attraction. Zidler, in turn, is relying on the patronage of the odious Duke (Richard Roxburgh) whose only condition in signing away the fortune it will take to convert the Moulin into a theater is that Satine become his mistress. The Duke gets his courtesan, Zidler gets his theater, the Bohemians get their play, and Satine gets the respectable career she's always dreamed of. It's a perfect set-up, which is why it will all go horribly, inevitably wrong.

Christian wins over the Bohemians and—after their original librettist storms out in a jealous rage—is put in charge of writing their show, Spectacular Spectacular!. To celebrate, they take him out to the Moulin Rouge, on, as it happens, the same night of the Duke's introduction to (and first scheduled rendezvous) with Satine. There is an interesting misunderstanding, but Christian's fundamental innocence and the power of his (well, Bernie Taupin's) poetry win her over, leaving her as starry-eyed with him as he is with her—until, of course, it is revealed that he isn't actually the Duke. As the months pass—as the Moulin becomes a theater and the show comes together—it becomes increasingly evident that their mutual attraction is too strong to ignore. However, the Duke is far less buffoonish than he appears, and if he is crossed, in love or otherwise, there's no telling what lengths he'll go to to keep the new lovers apart...

The film is a wild mishmash of genres, kinetic editing and atmosphere, often compared to a Music Video for its use of Jitter Cam. It is also composed almost exclusively of Cover Versions of songs, though most of them have been rewritten into new styles. Madonna's "Like a Virgin" becomes a Busby Berkeley Number (sung by a man), for instance, and the film contains only one song which the audience has never heard before (which, in fact, was originally intended for Luhrmann's William Shakespeare's Romeo + Juliet). It is also one of the most triumphant examples of the First Law of Tragicomedies, taking it almost to Mood Whiplash territory; the bleak Framing Device of Christian at his typewriter switches quickly into a vibrant, almost cartoonish comedy before the inevitable spiral towards the Bittersweet / Downer Ending. Finally, it was the first movie musical to gain any sort of widespread popularity for a couple decades, and has helped launch the recent revival of the genre.

This movie has no relation to the biopic of the same. If you're looking for that, you'll find it here. A Screen-to-Stage Adaptation premiered in 2019.