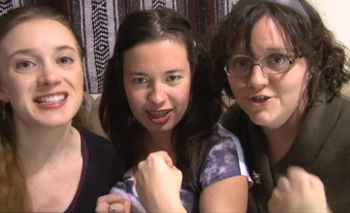 Lindsay Ellis was The Nostalgia Chick, one of three winners of a contest on Channel Awesome to recruit a Distaff Counterpart for The Nostalgia Critic, along with That Chick With The Goggles and MarzGurl. Like MarzGurl, her concept drifted into other waters; her videos nowadays talk about the themes surrounding the movie more than the movie itself, which stems from Lindsay's Master's degree in film criticism.

There have been a few story arcs, too, which can be summed up in three tropes: Girls vs. Boys Plotnote The Chick breaks out of the Girl-Show Ghetto to review whatever she likes, leading to a power struggle with The Nostalgia Critic, The Dog Bites Backnote Much-abused sidekick Nella is taken over by a Superpowered Evil Side and wreaks vengeance in a form of the XMen "Dark Phoenix Saga" (also where the character of the Nostalgia Chick really consolidates) and Stalker with a Crushnote Reality Subtext leads to the Chick developing an obsessive crush on Todd in the Shadows and going to great lengths to try and make him love her (while he remains fixated on Lupa).

She created the site Chez Apocalypse to host her and her friends's videos, which lasted until Blip's closure in 2015.

Lindsay, Nella, and Elisa also wrote Viridian Saga, a parody of teen-oriented paranormal romances, originally known by the working titles Fifty Shades of Green or Sexy Alien Book. The plot can be summed up as "Twilight meets the Cthulhu Mythos", with the Bella-analogue Andromeda "Andi" Slate (known during writing as "Lego Brick") falling for one of the Old Ones, who has taken the form of a handsome, brooding teenage boy named Riley Bay. The book is being written by an eight-person team composed of Lindsay, Nella, Elisa, and five ghostwriters picked from the community, under the Portmanteau pseudonym of "Serra Elinsen" (derived from their last names). Their videos on the writing process can be seen here

On 10 January 2015, Lindsay announced that the time had come for her and Channel Awesome to part ways. Though Ellis would keep doing videos, the "Nostalgia Chick" name would be retired and she would separate to pursue her own projects. See the announcement for it here

. The show morphed into Loose Canon, in which she analyzes and compares various fictional characters' different adaptation incarnations throughout time and mediums, a format she had introduced in (what would end up being) the final episode released under the Nostalgia Chick banner.

Despite the title, the Nostalgia Chick is no more, and she should just be referred to as Lindsay. Notably, following the Change the Channel movement, Lindsay now openly identifies her Nostalgia Chick content as an Old Shame, and with the mass excavation of her work under the name, it is now nigh-impossible to find her old reviews.

"I only like X-Men in an intellectual, analytical, culturally relevant way— [dosed with Truth Serum] —oh my god this was the best show ever, you guys!"