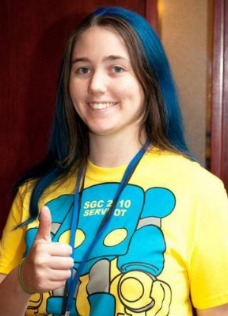 (Kaylyn Dicksion Saucedo; the alias is a reference to Marvin the Martian and her gender) is one of three members of Channel Awesome who tried out for The Nostalgia Chick position. While neither she nor That Chick With The Goggles won the position, they were still kept on as entertainment for the site, with Marzgurl covering anime and anime-related news. Previously a videographer of anime conventions, MarzGurl has made several attempts and reattempts to reinvent herself, often failing, and often acknowledging her own failure. She finally seems to have found her voice with the Anime News Editorial, a serious commentary on current events in the medium, as well as with her The Land Before Time movie reviews.

She completed the web movie Farewell, FamiKamen Rider as a tribute to JewWario.