TGWTG Anniversary Crossovers: TGWTG Year One Brawl | Kickassia | Suburban Knights | To Boldly Flee | The Uncanny Valley| A Voice from the Darknote sequel to the 3 movies unafilliated with Channel Awesome 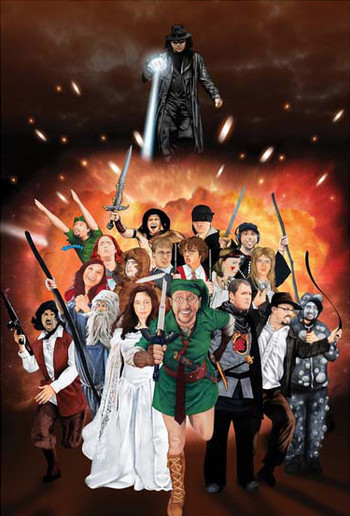 "Okay, you all look epically ridiculous.
Now this is the kind of team that's gonna get us riches!"
"Names will be remembered. Quests will become legends. And legends will become... legendary."

The third year anniversary special for Channel Awesome, featuring 18 contributors, and separated into 7 videos that were posted in the week of June 26th, 2011; the final installment appeared the following Saturday, July 2nd.

It is an adventure-comedy about The Nostalgia Critic, like last time, gathering a ton of reviewers and leading them into going on a quest. But this time, it is for a legendary gauntlet that is hidden somewhere in suburban Illinois, and according to the map, they must all dress up as famous fictional characters in order to find it.note Not LARPing, though. That's something completely different that only dorks do. That's totally not what this is. Real villains start showing up to stop their plans, and they discover that this isn't so much a "game" as they had first assumed!

Commentaries were also provided, by The Spoony One and friends