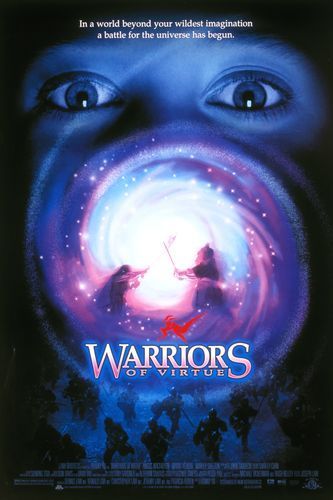 Ryan Jeffers just wants to be accepted by his peers, but is constantly insulted and bullied, with the school's quarterback Brad leading the charge... all because he wears a metal splint on his leg. To cope, he enjoys reading martial arts comics and Chinese mythology. Shortly after his friend Ming gives him a book called the Manuscript of Tao, Ryan attempts to prove himself to Brad and his gang, and ends up transported to another world — the world of Tao.

Good news is that he can walk there. Bad news... Tao is on the brink of destruction at the hands of the insane Komodo, who's been tapping into the mystical Lifesprings to gain eternal life. In fact, there's only one Lifespring left, serving as the last bastion against his evil reign, and protected by five warriors able to wield the forces of Nature: the Warriors of Virtue.

...Oh, and did we mention the five warriors are all anthropomorphic kangaroos?

Despite that little detail, 1997's Warriors of Virtue takes itself very seriously, a strait-laced, by-the-book martial arts film for kids directed by Ronny Yu (his first English-language film). As its title suggests, it's very heavy on the importance of virtue, particularly when it comes to the value of life: the Warriors do not kill, which leads to the obvious question of how to deal with Komodo...

A series of five books by John Vornholt were released afterward as a set of sequels: each volume followed one of the Roos as they split up (accompanied by a Ryan, Chucky and some of their so-called friends) to solve a problem facing each Warrior's homeland.

A film sequel titled Warriors of Virtue: The Return to Tao was released in 2002.

The film sequel contains examples of: