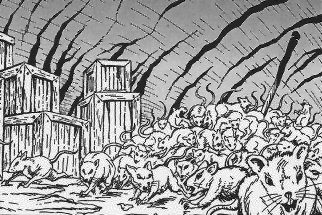 "'The rat,' said O'Brien, still addressing his invisible audience, 'although a rodent, is carnivorous. You are aware of that. You will have heard of the things that happen in the poor quarters of this town. In some streets a woman dare not leave her baby alone in the house, even for five minutes. The rats are certain to attack it. Within quite a small time they will strip it to the bones. They also attack sick or dying people. They show astonishing intelligence in knowing when a human being is helpless.'"
— Nineteen Eighty Four

Rodents are widely reviled, but not very threatening; after all, anyone can set a mousetrap. So how do writers make them a legitimate threat? By having a very, very large swarm of them all at once! One rat isn't scary, but a huge wave of rats eating a victim alive, one bite at a time? Horrifying.

Rats and mice are perfect for the "huge swarm" treatment, since, as any exterminator will tell you, they tend to breed a lot. And really fast. Also, as omnivores, they can and will eat meat — sometimes even if said meat is still alive — and rats in particular have strong enough teeth to chew through metal.

Sometimes used as a threat to prisoners in a dungeon.

See also Cruel and Unusual Death, Devoured by the Horde, and Rodents of Unusual Size. A subtrope of The Swarm and a sister trope of Spider Swarm. Contrast with Even the Rats Won't Touch It, and with Reduced to Ratburgers, an inversion. Not to be confused with You Dirty Rat!.

Rats in the Basement

When Cole tries to stop Paige from killing a rat in the basement, they both see a swarm of rats eating their food and Paige and Cole run out of the basement in terror.

Rats in the Basement

When Cole tries to stop Paige from killing a rat in the basement, they both see a swarm of rats eating their food and Paige and Cole run out of the basement in terror.