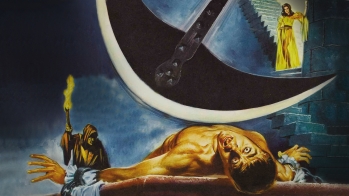 A classic Death Trap, tracing its origins to Edgar Allan Poe's The Pit and the Pendulum. The hero is strapped to a table beneath a blade mounted on a pendulum. When activated, the pendulum descends slightly with each swing, gradually getting closer to the hero.