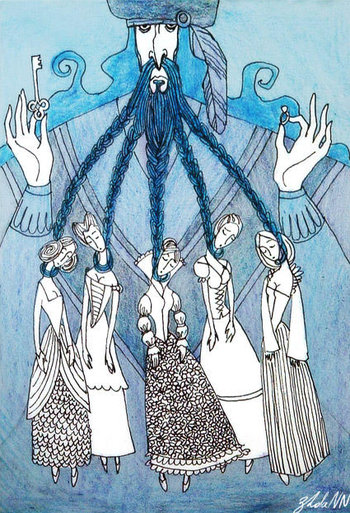 "For there upon the floor was blood,
and on the walls were wives,
For Bluebeard first had married them,
then cut their throats with knives."
— Jack Torrance, The Shining by Stephen King
Advertisement:

The Spear Counterpart of the Black Widow, the Bluebeard is a man who appears charming but hides a nefarious secret: he keeps marrying women and then murdering them.

Unlike the Black Widow, the Bluebeard is rarely motivated by greed, though in Real Life, historically that was a fairly common motivation. Often, he just does it for kicks or as the epitome of Domestic Abuse. If he has a pattern of cheating on his current wife with the woman who will become his next wife, it's Remarried to the Mistress.

Named after the famous fairy tale. Not to be confused with the character from Felidae. Nor with Captain Colorbeard; Bluebeards usually aren't pirates.