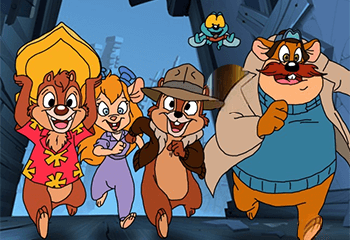 "Rescue Rangers, away!"
"There's no case too big, no case too small!
When you need help, just call!"
Advertisement:

Chip 'n Dale: Rescue Rangers was one of several Animated Series on the syndicated Disney Afternoon block of the late 1980s into the 1990s. It continues the block's trend of recasting classic Disney characters in new settings, this time with the chipmunk duo of Chip 'n Dale.

In this series, Chip and Dale are no longer mischievous troublemakers but rather amateur crimefighters. Joining them in their adventures are Monterey "Monty" Jack, a tough but lovable Australian mouse with a weakness for cheese; Monty's friend Zipper, a small fly who could not speak understandably, but had unusual strength for his small size; and Gadget Hackwrench, a blonde female mouse who was a skilled inventor and mechanic as well as both chipmunks' unrequited love interest. The team, dubbed the "Rescue Rangers," operate out of a tree in a local park and regularly take on a Rogues Gallery of unusual villains, such as the feline crime lord Fat Cat (whose owner, a human crime lord, was the target of the team's first mission) and megalomaniacal human inventor Norton Nimnul, along with similar one-shot criminals.

Like most of the shows from The Disney Afternoon, it had a couple of well-received video game tie-ins by Capcom.

A comic book continuation by Boom! Kids began in 2010, on the heels of the successful revival of Darkwing Duck as a comic series, the latter of which featured a cameo by Gadget in one issue as a bit of foreshadowing. It ran for eight issues (two arcs) before being unceremoniously discontinued. The Rescue Rangers later made an appearance in the DuckTales (2017) episode "Double-O Duck in You Only Crash Twice!" as test subjects for an intelligence-increasing ray, helping Dewey and Launchpad out during crucial moments.

2020 saw the launch of The Mouse Watch, a Spin-Off young adult novel series from Disney Books set in a possible future where Gadget is the leader of a spy organization defending the world against a Nebulous Evil Organisation named R.A.T.S: Rogue Animal Thieves Society.

A live-action/CGI feature film inspired by the series had been in Development Hell between 2014 and 2020, but was finally released on Disney+ in May 2022.

Dale encounters an alien emerging from inside a spaceship that he thought was a Walnut. Upon meeting the alien, the alien becomes scared of Dale's reaction and attempts to shapeshift into various things to escape Dale. However, the alien is unable to escape Dale and turns into a Giant Dragon to scare Dale.

Dale encounters an alien emerging from inside a spaceship that he thought was a Walnut. Upon meeting the alien, the alien becomes scared of Dale's reaction and attempts to shapeshift into various things to escape Dale. However, the alien is unable to escape Dale and turns into a Giant Dragon to scare Dale.