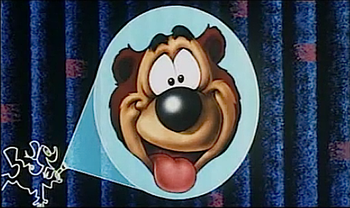 A fat, dumb, freeloading bear who lives in Brownstone National Park and is always on the lookout for an easy meal. Humphrey tended to run afoul of Donald Duck and fussy ranger J. Audubon Woodlore.

The Humphrey cartoons have been aptly described as "belly-laugh" shorts by Leonard Maltin, as they feature a broader, wilder style of comedy than the usually cute or coy gags typically associated with the Classic Disney Shorts.

Not to be confused with the star of the Australian children's show Here's Humphrey.

Grin and Bear It

Hooked Bear (One of only two shorts in his own series)

Survival of the Woodchucks

Tropes That Apply to Humphrey: