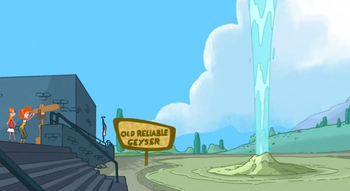 A trope most frequently seen in Western Animation set in a national park or other natural area, but tends to show up in other works as well. The Old Faithful (name may vary) is a geyser that, true to its name, erupts at very precise intervals, to the point that you can accurately predict when it will happen. For sake of plot, these eruptions tend to happen at either the most convenient or most inconvenient moment possible. Often accompanied by a sign that states the geyser's name and occasionally the time it is scheduled to erupt.

Frequently used for gags that involve unlucky characters ending up on top of the geyser just as it is about to go off. Sometimes the geyser can be set up as a trap for the same effect or be used for dramatic effect. Water-Geyser Volley may or may not apply.