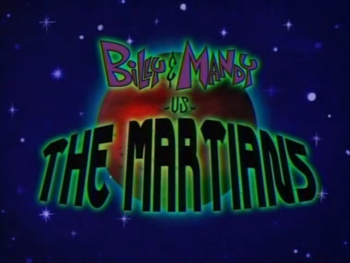 Just wait until next week's episode, "Billy & Mandy vs The Monorail".
A sub-trope of Paranormal Episode, wherein the bizarre happening involves space aliens visiting Earth; whether they come in peace, or not. Not necessarily a Bizarro Episode, but there's (unsurprisingly) frequent overlap.
Advertisement:

Sometimes done as a Ratings Stunt.

Note that this trope is specifically for when it happens in a show with a setting (i.e. otherwise mundane, fantasy, or even sci-fi) which does not normally feature extraterrestrial beings or creatures. And no, the episode isn't just about Xenomorph Aliens in particular. See also Cryptid Episode.