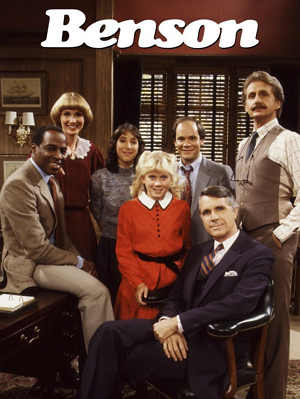 Benson was a half-hour sitcom that aired on ABC from 1979–86. It was a Spin-Off of Soap, and like that series was created by Susan Harris.

Robert Guillaume starred as Benson DuBois, who took over as head of household affairs at the Governor's Mansion under Gov. Eugene Gatling (James Noble) — cousin to Jessica and Mary of Soap. This put him in immediate conflict with Gretchen Kraus (Inga Swenson), the head cook who coveted the position for herself. Other characters included Gatling's daughter, Katie (Missy Gold); his chief of staff, Clayton Endicott III (René Auberjonois); his press secretary and photographer, Pete Downey (Ethan Phillips); and his ditzy personal secretary, Denise Stevens Downey (Didi Conn).

As the show went on, Benson climbed up the political ladder, thanks to Gov. Gatling's trust in him, going from working in the mansion staff to state Budget Director, and then to Lt. Governor, before finally running for Governor himself in the final season.

Not to be confused with the character from Regular Show.