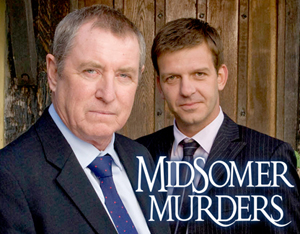 John Nettles as Inspector Barnaby and Jason Hughes as DS Jones.
Eastwood: ...Barnaby is about to have the bolt of inspiration that cracks the case, solves the murders and the artifact-smuggling ring, and find out that the postmistress is getting off with the vicar, who's secretly her uncle.
Lothar: How many times have you seen this episode?
Eastwood: Dunno, they all blur together after a while. It's a new one, Troy isn't in it.
— Exterminatus Now; also, living rooms across the UK

Has a bad case of Never One Murder (and a murder rate that ITV actually started making fun of in their adverts for this—the editors at Radio Times counted 321 homicides in the first 14 series), with the killer frequently Beneath Suspicion until five minutes from the end of each two-hour episode. Many episodes featured a Special Guest who turned out to be the murderer.

Has a brilliantly apt, lilting