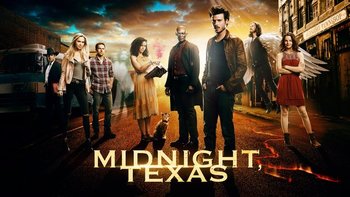 A small town with some odd folks.
Midnight, Texas is an American supernatural drama television series broadcast on NBC as a summer entry to the 2016–17 network television schedule. The series was commissioned on May 13, 2016. Midnight, Texas is based on the book series of the same name by author Charlaine Harris who also wrote The Southern Vampire Mysteries, the novels which were adapted into the True Blood television series. The series premiered on July 24, 2017.
Advertisement:

Manfred Bernardo (Francois Arnaud) is a Romani with Psychic Powers who is advised by his dead grandmother to go to Midnight, Texas in order to escape his former clients. Midnight, Texas turns out to be a haven for various supernaturals who have decided to retreat from the world.