Series / My Babysitter's a Vampire 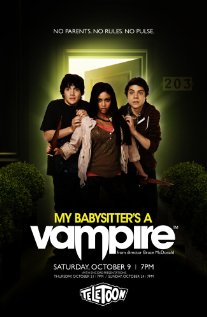 My Babysitter's a Vampire is a 2010 TV movie and then later a 2011 TV series developed for Canadian television that was later brought to the Disney Channel. It's made by Fresh TV, the same people behind 6teen, Total Drama and Stōked. It is notable for being one of the very few live-action works originally commissioned for the Canadian cable animation network Teletoon (others being Mudpit, Majority Rules, Beyond Human, Just Kidding, and Splat!).

The show has similarities to Nick's The Troop and the '90s Fox Family show Big Wolf on Campus (incidentally also a Canadian show), but My Babysitter's a Vampire is Darker and Edgier in terms of content matter and what is shown.

Despite very high ratings, Teletoon has decided not to renew the show for a third season. However, Fresh TV later announced

it was exploring the possibility of making a second movie that would continue where the story left off at the end of Season 2. This didn't happen though.

Not to be confused with My Babysitter Is a Vampire, the 1991 book series created by Ann Hodgman, which this is not an adaptation of.