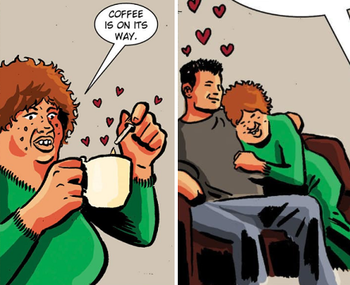 King Harold: You can't force someone to fall in love!
Fairy Godmother: I beg to differ. I do it all the time!
— Shrek 2
Advertisement:

Ah, the Love Potion. Not since the Eskimo Freezer was patented has there ever been such a useless invention. Not that love potions are ineffective, mind you; it's just that they rarely ever work as intended, to the point where one wonders why a character would even bother to use them at all. When you see someone employ a Love Potion these days, you almost expect it to fail. It should be a Discredited Trope by this time, but for some reason, characters continue to use Love Potions, with said potions continuing to cause far more trouble than they're worth.

If the plan for using the Love Potion is actually well thought out and shouldn't go wrong, expect some Contrived Coincidence to ensure that it does.

Of course, no matter which type of potion is used, the chances that the right people will actually drink the potion are less than .00001% on average. Even if the potion is put into a drink that's placed directly into the hands of the people for whom it's intended, some kind of mix-up is always bound to occur. For instance, if the Love Potion is given to the princess in an attempt to get her to fall in love with the hero, you can bet your life savings that she'll slip and fall, causing the potion to splash up into the open mouth of the hero-hating Tsundere. When folks imbibe a "drink it and fall in love with the first thing that you see" type of potion, then despite how miraculously good they always seem to be at avoiding children or family (on the rare occasion where this sort of Fridge Horror is even addressed, that is), it is virtually guaranteed that the first face the hero will see upon sipping the mixture is that of his own horse or that of his Plucky Comic Relief Sidekick. Even if it's only an aphrodisiac, a lot more people than expected are going to unknowingly chug it and engage in activities that put the raunchiest teen parties to shame.

Villains don't usually have all that much luck with Love Potions either, as they're often all-too susceptible to being rendered ineffective through that annoyingly pesky "Power of True Love" thing. No matter how strong a Love Potion might be at first, it will almost invariably fail once the entranced heroine sees her True Love lying bleeding and battered on the floor, seconds away from doom. In most cases, this will lead to a tearful reconciliation between the heroine and their Love Interest and to the hero picking herself up and kicking a lot of ass (as well as to the villain wondering just where he can get a refund on that stupid wonky potion). An even more chaotic backfiring is when the villain her/himself accidentally drinks said potion. Hilarity Ensues.

Villains may employ other means besides potions for winning someone's love (spells, brainwashing, illusions, and the like) but these usually have a comparable success rate (i.e., none). If it's particularly potent, it might cause Love Is in the Air and affect not just the intended drinker but everyone.

Even on occasions where a love potion works exactly as intended (most often in the case of Love Only Person X), with the right target falling for the right person, the whole thing has a tendency to work a little too well. The user will find, to their chagrin, that being obsessed over to the point of absurdity either destroys what they found attractive about the love interest in the first place or is simply too much to handle. Or they might come to realize that they'd rather their love remain unrequited than be artificially requited, thus learning a valuable Aesop.

Every once in a blue moon, you get a Shipper on Deck type who wants to use a love potion not for their own benefit, but on behalf of two people who would be "so perfect together", if only they just had a little nudge towards each other. But even the purest of intentions can lead to disaster, and it's a safe bet the would-be matchmaker will be desperately scrambling to undo their handiwork in short order.

The morality of magically forcing someone to fall in love or have sex with another is often overlooked, but occasionally explored — depending on how thoroughly someone's will is overridden by the effects of the potion, use of these things has the potential to make consent rather... dubious... if the story goes beyond PG-rated shows of love. It's becoming more common for a Magical Society to have declared love potions illegal because of this.

Frequently comes as a perfume rather than a drinkable. In these cases simply replace "drinks" with "gets sprayed with", as all the same mishaps tend to happen.

Grandpa's tonic causes any man who drinks it to be instantly filled with wild passion, usually resulting in their scooping up the woman they love and running to the nearest bedroom. As shown here with Homer.

Grandpa's tonic causes any man who drinks it to be instantly filled with wild passion, usually resulting in their scooping up the woman they love and running to the nearest bedroom. As shown here with Homer.