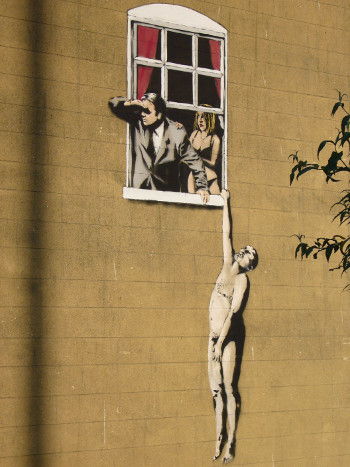 So you're a Lothario, perhaps even The Casanova, and you've just bedded your latest conquest after going back to her place. But what's that sound? Oh no, her (or in very rare cases, his) spouse is home! You're a lover, not a fighter, so deciding discretion is the better part of valor you grab your clothes (or not) and hightail it...out the window, where you're trapped thirty floors up on the convenient but narrow ledge, often in your Goofy Print Underwear, until it's safe for you to come back in. Better hope it's not raining.
Advertisement:

It's becoming something of a Discredited Trope in modern urban settings as art deco buildings are replaced by glass towers with no ledges and windows that don't open (though it still works with older buildings). The less physically daring version, but more likely to get caught, would be Closet Shuffle.