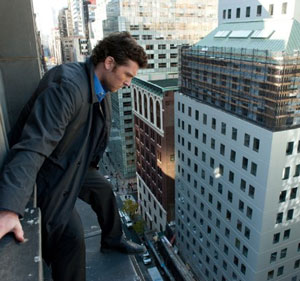 I wouldn't look down if I were you.
Advertisement:

Closely related to Lover's Ledge (but without the love), Precarious Ledge is precisely what it sounds like. It's a situation in which the characters have no choice but to navigate a dangerous ledge. This seemingly foolish route of travel can be taken for a variety of reasons. The Protagonist may be running away from The Syndicate or escaping The Men in Black, Climbing the Cliffs of Insanity, or exploring the Temple of Doom. But eventually, they will come to a point or seeming dead-end where the only way forward involves a high, ridiculously thin path upon which to traverse and advance.

While Lover's Ledge is particular to the escape by an adulterous sneakster, Precarious Ledge is more general; it can include everything from rocky cliff ledges to shiny white ledges in a futuristic facility, from the lip of a volcano to the edge of a high snowy mountain pass.

Perhaps the most defining feature of this trope is when the character will have his or her back pressed tightly against the structure as they move sideways very slowly.

Another way this trope is frequently used is when a character is about to potentially commit suicide by jumping. A character will threaten to jump of the ledge of a building, bridge, or other high structure.

No matter how this trope is used, there's always one common factor. When this trope occurs in some cinematic sequence, these scenes convey tension to the audience. A fear of heights, and indeed of falling from such heights, is quite common amongst people in general, and thus this trope plays on both fears. A little Plummet Perspective camerawork, and the whole thing just comes together so nicely.

Note that, when used in video games, it's not enough for the character to just be able to run along ledges with ease. Traveling along the ledge has to actually be precarious, meaning that the distance is high enough to be lethal or extremely dangerous, or there is Plummet Perspective. Bonus points if the character's animations reflect their fear in being on such a dangerous ledge.

Compare Talking Down the Suicidal when a character stands on a ledge to threaten suicide. Contrast No Escape but Down, where the heroes must jump into the unknown rather than get from Point A to Point B.

Doc on the ledge

Doc has to traverse a ledge on the clock tower. It doesn't go as planned.

Doc on the ledge

Doc has to traverse a ledge on the clock tower. It doesn't go as planned.