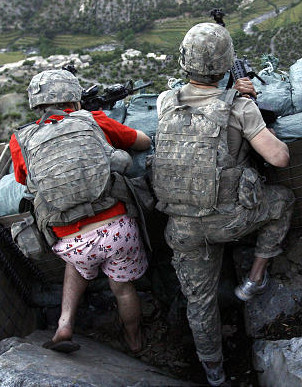 Undressed to kill.note Yes this is a real, unstaged photo
"You wear cartoony boxer shorts, you're begging to have your clothes stolen!"
— Duckman, after having mugged two Germans for their clothes.
Advertisement:

Exposing a character's underwear is always good for a laugh. This goes double if they have underwear with a silly or embarrassing print on it. Boxer shorts with polka dots, or better yet hearts on them seem to be popular. To the extent where it seems like nearly everyone in cartoons wears these. Well, that or these boxers cause trouser accidents.

Presumably, the fact that they wear utterly tasteless undies adds to the character's discomfort at being de-pantsed, especially if they try to maintain a hard-man reputation.

A Cringe Comedy may be take this Up to Eleven by having the victim wear elephant print underpants, with a humorous trunk on the fly which unrolls to an unrealistic length.

On the other hand, a female character in this type of underwear can be pretty potent Fanservice, especially if she looks much too mature to still be wearing them. If a woman is caught in nothing but, say, Snoopy panties, expect a male character to suddenly "remember" how much he's always admired the Peanuts gang (which, in fact, is similar to what happened to Chris Tucker in one of the Rush Hour films, only with a tattoo instead of panties).

A Sister Trope to Fun T-Shirt.

And no, this doesn't necessarily mean Goofy will be on the underwear—though that's not ruled out.