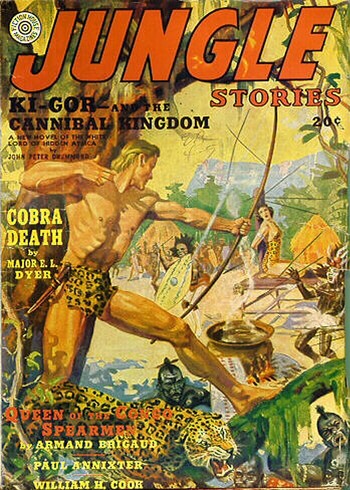 Most definitely not Tarzan
Advertisement:

An Expy of Tarzan, and the Spear Counterpart to Jungle Princess. A Tarzan Boy is a white man who lives in the jungle, usually in the Darkest Africa. He's usually Raised by Wolves after being marooned in the jungle as a child. Expect the Nubile Savage trope to be in play, as the Tarzan Boy will always be handsome and surprisingly well-groomed and clean-shaven for a guy who lives completely isolated from civilization. Often he will have one or several animal companions and is able to communicate with them. He'll wear a Loincloth and travel around by Vine Swing.

Tarzan Boy usually finds his "Jane" in a civilized white woman he has to rescue. Sometimes, however, he will choose his Distaff Counterpart, the Jungle Princess, or occasionally the native Chief's daughter (who will inevitably be drawn in a much more attractive manner than the other natives who are seen).

This trope was extremely popular up until The '50s. As with many pulp tropes, its popularity waned in the second part of the twentieth century, but there were still occasional attempts to revisit it, either parodic or serious. Interestingly, this trope's Distaff Counterpart, Jungle Princess, eventually surpassed it in popularity.

Subtrope of Nature Hero. Compare Handsome Heroic Caveman, the prehistoric equivalent. Contrast Frazetta Man (these are usually present as Tarzan Boy's enemies, to further emphasize the contrast between them).