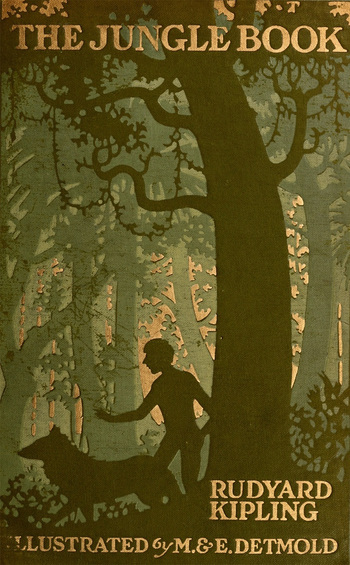 A collection of stories published in 1894 by Rudyard Kipling, primarily about a Wild Child named Mowgli, and followed by a sequel, The Second Jungle Book, in 1895. Not to be confused with the novel The Jungle by Upton Sinclair.

The stories detail Mowgli's childhood and youth; of his upbringing with the wolf-pack and his battles with the great lame tiger Shere Khan; of his friendships with Bagheera the panther, Baloo the bear, and Kaa the python; of his abduction by the Bandar-Log of the Cold Lairs and his great war against the Dhole; and of his meeting with the White Cobra and his vendetta against his old people. Not all of the stories concerned Mowgli; the most well known exceptions being "Rikki Tikki Tavi" and "Toomai of the Elephants" in the first, and "The Miracle of Purun Bhagat" and "The Undertakers" in the second.

In 1900, Kipling wrote a stage adaptation of the Mowgli stories which he never published or produced. It was finally discovered among his papers and published in 2000 as The Jungle Play.

The original work is out of copyright in many countries, including the UK and the US, so Mowgli and friends are now Public Domain Characters.note In Kipling's native UK, the copyright originally expired in 1986, 50 years after his death, but then copyright was extended to 70 years so his works went back into copyright until the extended term expired in 2006. In the US, the copyright expired in 1951.

The Jungle Books were instant hits and remain popular today, more than a century after they were conceived by Kipling. There are endless debates about the quality of Kipling's prose and poetry, his politics and racial views, but the books are still considered classics.

Zoltan Korda turned The Jungle Book into a live-action movie using real animals in 1942, giving the part of Mowgli to Sabu, the star of The Thief of Bagdad (1940). See Film.Jungle Book.

Disney found The Jungle Book, and loved at least some of its ideas, so they chose it for one of their Animated Adaptations. The result was and is widely considered a great Disney film, the best and perhaps most original animated Disney film of the 1960s. That said, this adaptation of The Jungle Book was one of the greatest cases of Adaptation Displacement in history, so great a case that Disney felt free to use some of Mowgli's friends and foes and rivals far, far away from the books and jungles where they were conceived, and so it considers them its own. This is the probable reason why Kipling doesn't receive a credit on TaleSpin, an Animated Series that puts three of the main characters from The Jungle Book (or Disney's version, at least) into an Alternate Continuity. A second series was created using the Disney interpretations Jungle Cubs reinventing the childhood lives of the animal residents into comical stories. See Disney: The Jungle Book.

On the other hand, the great animation genius, Chuck Jones, produced three animated TV specials in the 1970s, Mowgli's Brothers, Rikki Tikki Tavi and The White Seal that were much more faithful to the original stories.

There is also a Soviet animated series called Adventures of Mowgli, that is extremely faithful to the stories and to the general mood and style. No human-like mimics in animals here. However, some of the animal characters changed their gender — most notably, Bagheera is female (since the word "panther" is always feminine in Russian) in this adaptation. Rikki Tikki Tavi has also been adapted twice in the Soviet Union: first, as a 1965 cartoon, then, in 1975, as a live action film.

An anime series based on the books was also created. Jungle Book: Shonen Mowgli, though somewhat more faithful to the original novels than the Disney adaption, takes a similar more whimsical atmosphere, as well as expanding the cast and plot line to fit its over fifty episode long run. The anime aired during the late eighties and early nineties, amusingly around the same time Disney recycled some of their concepts adapted from the books for The Disney Afternoon series TaleSpin.

There was a live-action 1994 film based on the Jungle Book, called Rudyard Kipling's The Jungle Book. It was directed by Stephen Sommers. While taking elements from the original books and the 1967 animated film, it had a very different storyline. It mostly focused on Mowgli's (Jason Scott Lee) life after leaving the jungle: having to become accustomed to life in British-colonial India and attempting to woo upper-class love interest Katherine Anne "Kitty" Brydon (Lena Headey). See The Jungle Book.

An unrelated film called The Second Jungle Book: Mowgli & Baloo (1997) was released, possibly to cash in on the popularity of the above. It featured a still pre-teen Mowgli (Jamie Williams) pursued by the recruiting agents of a circus. The film performed poorly in theaters, but proved a hit in the video market. Which explains why there was yet another live action film, Jungle Book: Mowgli's Story (1998), a straight to video production. It featured Brandon Baker as Mowgli and various voice actors speaking for the animal characters. Despite featuring well-known actors such as Clancy Brown and Nancy Cartwright, it seems to be the most obscure of the three (though ironically the nearest Disney got to a faithful rendition of the novel).

There are two film adaptations, both featuring a combination of live actors and CGI with an All-Star Cast of voice actors. One, which came out in 2016, is produced by Disney and directed by Jon Favreau. The other, released in 2018 on Netflix, is titled Mowgli, produced by Warner Bros., and directed by Andy Serkis (who also plays Baloo via motion capture). Interestingly, both adaptations Gender Flip Kaa the python (voiced by Scarlett Johansson and Cate Blanchett, respectively).

More recently (2010), there has been an Indian-made CGI TV series comprising 15-minute episodes, very loosely based on the stories and aimed at younger viewers.

There have also been several comic book adaptations, including an issue of Classics Illustrated (1951), three issues of Dell Four-Color (1953-5), a serialisation in Marvel Fanfare (1980s), and three Second Jungle Book stories adapted by P. Craig Russell (1985-96).

Besides The Jungle Play, a high number of stage adaptations have been created, including A dzsungel könyve in Hungary.

open/close all folders
Stories
The Jungle Book stories consist of the following: