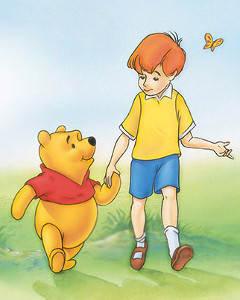 Bears Are Bad News? News to me.
Dashing and daring, courageous and caring
Faithful and friendly, with stories to share.
All through the forest, they sing out in chorus
Marching along as their song fills the air!
Gummi Bears!
Bouncing here and there and everywhere
High adventure that's beyond compare
They are the Gummi Bears!
— Adventures of the Gummi Bears
Advertisement:

Sometimes in the media, bears have been portrayed as fierce and intimidating, but that's not always the case. Some of the other portrayals paint bears in a more sympathetic light, sometimes even to the extent of being a Gentle Giant, and their big size certainly helps. Through such portrayals, they are not merely non-aggressive aversions or subversions to Bears Are Bad News, but they tend to show friendly interactions with humans or other sentient beings. Not that they can't be bad news if you, ahem, get funny with one.

This trope may have something to do with how unlike their fellow carnivoran mammals like wolves and big cats, bears are omnivores as opposed to obligate carnivores, some species even leaning toward or even being herbivorous, and so goes the assumption that Herbivores Are Friendly.

Teddy Bears, when portrayed as Living Toys, usually fall into this category.

Compare Beary Funny, where bears are portrayed through comedic means.

Contrast Bears Are Bad News for bears who are neither friendly nor funny, though it can overlap through a well-pushed Berserk Button.