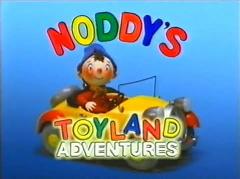 Hello, Noddy!
Noddy (Noddy),
The little man with the red and yellow car,
Noddy (Noddy),
His tinkling bell means he’s the happiest little fellow in all Toyland.
There’s Big Ears and Tubby and Mr. Plod, and all his special friends,
He sets out on adventures then he’ll take you home again.
Noddy (Noddy),
Noddy,
Noddy!
— Original theme song for "Noddy's Toyland Adventures"
Advertisement:

Noddy's Toyland Adventures is a toymation cartoon first broadcast on The BBC in 1992, and ended in 2001. In case you don't know who Noddy was, then it will be explained. Noddy was originally seen for the first time in a series of books written by Enid Blyton (Famous Five, The Enchanted Wood, The Magic Faraway Tree, The Wishing Chair) between 1949 and 1963. Also, this was not the first time Noddy's adventures had been adapted for television - at least three other stop-motion series had preceded it, the first airing all the way back in the mid-1950s.

The show and the books follow the adventures of Noddy, a little wooden doll who wears a pointed hat and drives a little yellow car that goes Putt-Putt. He lives next door to a tricksy little teddy bear called Master Tubby Bear, who lives with Mr. and Mrs. Tubby Bear, and, of course, Noddy's girlfriend, Tessie Bear! Noddy's best friend besides her is Big Ears, who is Exactly What It Says on the Tin. He's got big ears. The Toyland policeman is called Mr. Plod, who most of the time asks Noddy whether he can be Noddy's Special Constable.

You'd think there's No Antagonist in the cartoon, would you? Well, think again! There are twin goblins, who like to cause mischief around Toyland by stealing ... but they never do anything that would ordinarily kill a person, they just ruin Noddy's life for whatever reason! At the end of the episode, they get a punishment behind bars, which they deserve!

The series was also broadcast on PBS Kids, TV Ontario and CBC in North America, with the cartoon getting sandwiched by a live action show that takes place in a toy store known as The Noddy Shop. All of the characters in the Toyland Adventures segments got redubbed with American voices and sometimes made appearances in the actual show, with Noddy gaining the ability to talk to Truman, one of the human characters, as well as the toy characters and Johnny Crawfish, in the second season. Although this show was made for the North American market, the first forty episodes and the Christmas Special, as well as a book featuring the characters from the shop, two VHS releases and a DVD, still made it to Britain.

In 2001, a CGI spinoff- Make Way For Noddy- premiered. It was a UK-Canada co-production and the producer was Sabella Dern. As a result, the North American dub of the CGI show used the talents of The Ocean Group. In the US, a short segment, Say It With Noddy, was pinned on to the show to teach Spanish and other languages. Reruns of the show can currently be found on PBS Kids Sprout.

In 2009, a second CGI revival, Noddy In Toyland premiered, with an even Lighter and Softer premise and some of the characters, notably Tessie Bear and the goblins, given a redesign. The series was created to celebrate the franchise's 60th Anniversary. In France, this incarnation gained two exclusive stages shows (Oui-Oui El Le Cadeau Surprise which ran from 2009 till 2011 and Oui-Oui E Le Grand Carnaval which ran from 2012 till 2013) due to it's massive popularity in that country.

In April 2015, a third CGI series starring Noddy called Noddy, Toyland Detective premiered, recasting Noddy as a super sleuth and reimagining Toyland even more than the previous shows. The show is also animated by Dreamworks Animation Television, boosting a much bigger animation budget and a noticeable restyling of the franchise and characters.

These include past merchandise, spin offs, audio adaptations, and books published before and after her death. The creation of Noddy was also briefly touched upon in the 2009 biopic Enid about the life of Enid Blyton (played by Helena Bonham Carter) and her relationship with her family. The biopic aired on BBC Four on November 19, 2009 to commemorate the franchise's 60th anniversary that year.

also features a large selection of episodes from Toyland Adventures and its successor cartoons.

"It seems that Enid Blyton's greatest fictional creation was neither Noddy, nor Mr. Plod the policeman or Big-Ears — but Enid herself. The most intriguing and one of the saddest facts I discovered in my research was that Enid Blyton fictionalised her whole life."
— 'Biography comment in The Chronicle September 9th, 1974
And now it's time for Noddy to wave and say goodbye,
He's tired and sleepy and nodding his head.
He's ready to curl himself up in bed and see what tomorrow brings.
For Noddy, Noddy
Noddy
(Noddy giggles)
——