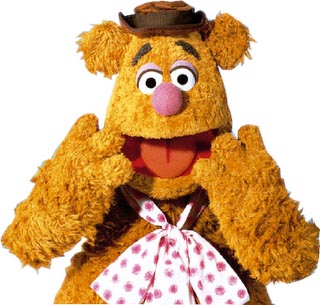 The only time this bear is bad news is when his jokes are flat.

Perhaps it's because of the proliferation of the Teddy Bear as a child's toy, but bears are often portrayed as Boisterous Bruisers or sometimes just Big Fun, and aren't really looking to eat people so much as just looking to eat. (Truth in Television; most bears are omnivorous and will gladly eat nuts and berries; also, while grizzlies are aggressive, their favorite food is salmon.) Seems most common in Western Animation, although circus bears are common in Real Life.

Ursine Aliens can invoke this trope. Contrast Bears Are Bad News. Compare Beary Friendly, which examples here can also be.