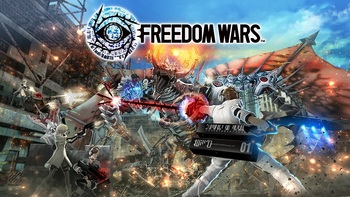 For The Greater Good!note See that giant robot dragon called the Dionaea? You don't get to fight it until post-game, unless you count Retribution/Spec-Ops missions during Story Mode.
"Fight Your Way to Freedom!"
— Tagline
Advertisement:

Freedom Wars is an Action Game with Third-Person Shooter elements for the PS Vita, developed by Japan Studio, Shift, and Dimps, and published by Sony. It was released in Japan on June 26th, 2014, October 28th in the US, and on the 29th in Europe.

The year is 102014 PE, one hundred-thousand years into the future. The Earth has been stripped of its resources and mankind has grown too large to sustain itself. To prevent the complete collapse of life, humanity has organised itself into competing "Panopticons": oppressive city-states where control is maintained through draconian law and pervasive surveillance. Those who are not "Citizens" working tirelessly for the greater good of their Panopticon are judged to be "Sinners" and sentenced to one million years imprisonment for the high crime of being an inefficient use of resources.

You are one such Sinner, and like all Sinners you have two options: to rot in your holding cell until you die, or to "repay society" by fighting on the frontlines against rival Panopticons and the mysterious "Abductors". With the aid of your Accessory, an android that acts as both your companion and warden, you must fight to earn your freedom amidst an escalating clash of forces that seek to bring about something called "The Great Transformation".

Not to be confused with the similarly named Freedom Planet.