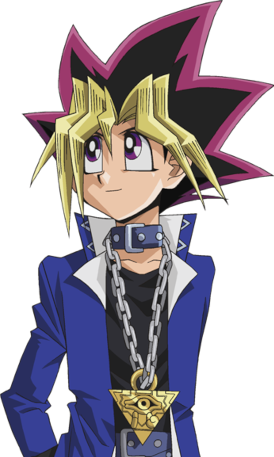 Why yes, these are my natural hair colors. Why do you ask?
Lotta: Wait, you best not be making fun of my hair, now!
Phoenix: Ah, no, um, I wasn't "making fun"...I was "complimenting" you on your fine hair...
— Phoenix Wright: Ace Attorney – Justice For All
Advertisement:

A catch-all term used for anime, manga and other cartoon and comic characters with bizarre, improbable, exotic, or just plain wacky-looking hairstyles.

Usually, the most important characters of the story will have wild spikes or a cool-looking hairdo in order to stand out among the crowd. It also helps to create a distinctive silhouette that will stand out in branding, media, and merchandise. It may be one or more different colors that don't appear naturally in real humans (blue is a popular choice). Sometimes the hair appears semi-transparent, with the character's eyes visible through it, although this presumably represents hair fine enough that it isn't completely obscuring, rather than anything outré. Anime Hair is very common among protagonists of anime/manga for the shōnen demographic, although the trend seems to be headed to more plausible styles: compare Son Goku's hair to Ichigo's.

Advertisement:
Forms of Anime Hair include:

Compare also '80s Hair, one of Real Life's best counterparts, and a major influence on this trope.

White Diamond's hair is massive and spiky. Combined with her natural glow and it looks like a shining star.

White Diamond's hair is massive and spiky. Combined with her natural glow and it looks like a shining star.