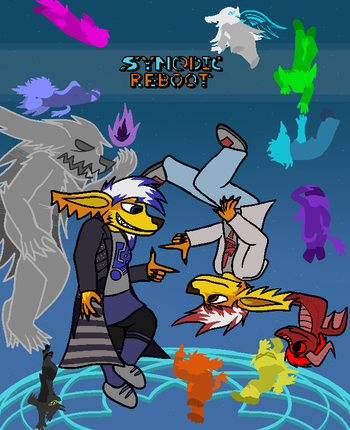 Looking back, maybe you should have stayed to face the end.

is a (relatively) Interactive Comic incorporating several full, audio Flash animations. Though it is a "fan adventure" borrowing several core concepts from Homestuck, it is written more as a standalone story with its own unique characters, with care taken to ensure its readability despite potential unfamiliarity with its most direct source of inspiration.

Synodic Reboot revolves around a core group of ten characters of a species known as adlets, who unwittingly became involved in a force much more powerful than they could have imagined when they initially thought they were going to be playing a regular computer game. This reality-manipulating force has set the destruction of their home planet Nobriel into motion, while simultaneously providing the means to teleport its ten players into a completely new sub-universe to escape the apocalypse. As these stories tend to progress, that will only be the beginning.

Running since December 15, 2015, Synodic Reboot is currently within the top 50 comics on its host site, with about 850 pages in its second Act.