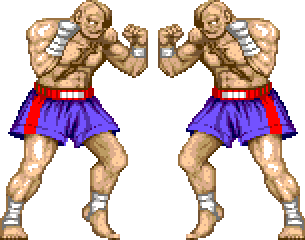 Behold, the mystery of the flipping scar, eyepatch and hand wraps.
"Hey, I'm pretty sure it was the other headlight that was broken when I left."
— Detective Inspector Hector, Hector: Badge of Carnage
Advertisement:

Sprites are pixel art characters used in video games. Unlike a 3D model, you can't simply rotate a sprite to get a new view of it. Additional clothes, poses, and each frame of animation for actions have to be made almost entirely from scratch. For this reason, artists will usually make sprites perfectly bilaterally symmetrical so that any poses or actions made while facing left can simply be flipped to make the same poses and actions facing right. On earlier platforms there were also memory size concerns, so it was often more efficient to mirror the sprite than to store the opposite poses, especially with graphics hardware that made horizontal flipping as simple as changing one bit of sprite data.

However, sometimes a character doesn't lend themselves well to symmetry. They might have an object in one hand, an eye patch or scar on one side, or some other form of Fashionable Asymmetry. Whatever it is, simply flipping the sprite causes the feature to "change sides". In the most blatant examples, the sprite will have letters or numbers on it which flip with the sprite.

Sometimes, developers will take the time to make a separate sprite for both the left and right facings. Usually, though, they won't bother.

This isn't limited to 2D games, although it is most common there. Older 3D games store the views of the character positioned in 45-degree increments, but will stop at 180 degrees and make up the three remaining views through mirroring. In addition, many modern 3D fighting games mirror the character animations intentionally to resemble their 2D precursors and additionally to maintain the visual clarity of each move. Tropes Are Not Bad, it still seems.

With the advent of Flash as an animation platform, this started to leak from video games into animation as well; compare Cheated Angle. See also Right-Handed Left-Handed Guns, an example of this trope specific to the player's weapons in a First-Person Shooter.

Since this is a ubiquitous trope, please only note examples where it is either glaringly obvious or averted.