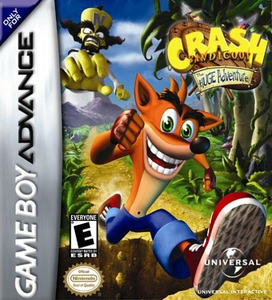 Following Uka Uka's disappointment for Cortex having failed him again, Cortex promises he has a new plan that will not fail. He builds a Shrink Ray that minimizes the Earth down to the size of his hand, and it's up to Crash to try and stop him by collecting Crystals to power up Coco's machine that can reverse the shrinking effects.

Vicarious Visions followed The Huge Adventure with two sequels with the same basic gameplay: 2003's Crash Bandicoot 2: N-Tranced (basically a Mission-Pack Sequel with additional features such as gem shards and different levels), and 2004's Crash Bandicoot Purple: Ripto's Rampage (a Spyro the Dragon Crossover with more mini-games), plus a handheld version of Crash Nitro Kart in between.