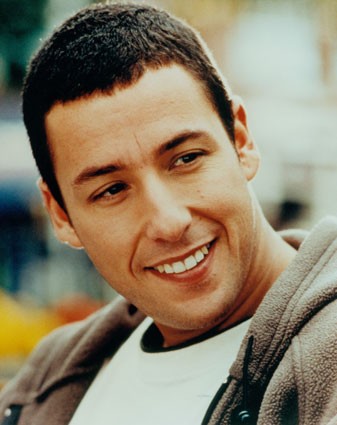 "I never thought about what people would say about me. I was just a young guy who was excited to become a comedian and an actor, and I just wanted to get to do what I got to do."
Advertisement:

After several years as a Saturday Night Live writer and cast member (from 1990 to 1995note That's from the middle of season 16 to the end of season 20. During those years, he, along with Rob Schneider, David Spade, and Chris Farley, were known as "The Bad Boys of SNL" due to their penchant for gross, crass humor, which a lot of critics hated about Saturday Night Live during the early to mid-1990s), he went on to star in several Hollywood feature films that grossed over 4.8 billion USD at the worldwide box office and remains as a major box office draw. He is best known for his comedic roles, though he has ventured into more dramatic territory.

His characters usually fall under the Jerk with a Heart of Gold, but also with a healthy dose of Manchild with a serious need to grow up. Realizing that he can only take that role so far, he has sought to expand his range into a couple of dramas. Otherwise he takes much of the Deadpan Snarker behavior but adds some more complex motivation behind it.

Responsible for Happy Madison Productions, and often plays a music fan. Expect '70s and '80s music (like Led Zeppelin) to be not only part of the soundtrack, but part of the spoken dialog in some way, shape or form. Also expect Sandler's character to appear at least once wearing sports or college memorabilia (t-shirts, hats, etc.) with a New York or New England connection. Also expect blatant, shameless product placement, to the point that it's so absurdly exaggerated that it's actually funny sometimes ("WHERE'S MY SNAK-PAK?!" or "WILL SOMEBODY GET THE KID A HAPPY MEAL?!")

Enjoys something of a reputation as "one of the nicest celebrities in Real Life".

On Saturday Night Live, Sandler's recurring characters include Opera Man (an opera singer who sings the news), Audience McGee (a random SNL audience member who interrupts the show), Cajun Man, Brian (an obsessed man who hosts a talk show called The Denise Show where he still pines for his ex-girlfriend), The Herlihy Boy (a shy boy whose loud, boisterous father [Chris Farley] yells at people to let his son hire him), Lucy Brawn (one of the Gap Girls [which was Sandler, Chris Farley, and David Spade dressed in drag as Valley Girls]), Hank Gelfand (the miserable husband and co-host to his cheerful wife and host, Beverly [Chris Farley], of Zagat's), and Canteen Boy (a possibly autistic, 27-year-old Boy Scout who is often bullied and ostracized for his behavior and, in a now-infamous sketch, was almost molested by his scout leader, Mr. Armstrong [played by frequent guest host Alec Baldwin]). Sandler's notable celebrity impressions include: Pauly Shore, Bill Cosbynote yes, really. While blackface wasn't used, it might make people cringe today for reasons that won't be discussed here, Axl Rose, Tom Jones, Steven Tyler, Charles Manson, Bono from the band U2, Mark Wahlberg (and his brother, Donnie), and Richard Lewis.

The price is WRONG, TV Tropes:

Adam Sandler and Andy Samberg sing an ode to this trope (to the tune of "Simply the Best") at the SNL 40th anniversary celebration.

Adam Sandler and Andy Samberg sing an ode to this trope (to the tune of "Simply the Best") at the SNL 40th anniversary celebration.