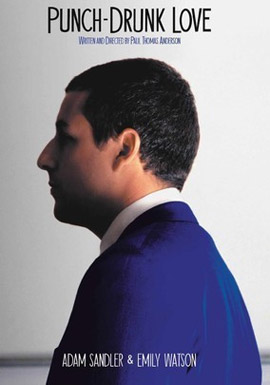 "You can go places in the world with pudding."
"I have a love in my life. It makes me stronger than anything you can imagine."
— Barry Egan
Advertisement:

The film tells the story of Barry Egan (Sandler), a sweet-natured but socially inept and introverted manchild whose life revolves around his novelty plunger business ("Fun-gers") and attempts to extricate himself from the domineering influence of his seven sisters. His interests mainly include buying up large quantities of pudding to take advantage of their company's air miles offer and using phone sex lines to alleviate his loneliness.

Then one day, Lena Leonard (Watson) walks into his life, and everything changes.

Punch-Drunk Love is notable as one of P.T. Anderson's low-key works, made between the epics Magnolia and There Will Be Blood, and for showcasing the dramatic chops of Adam Sandler while simultaneously being a warped postmodern take on the rom-com.

This Film Contains Examples of the following tropes: