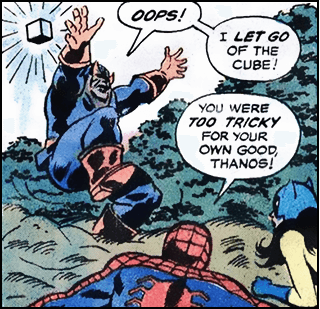 Oops! I added a caption to the image!
"One of the things Ford Prefect had always found hardest to understand about humans was their habit of continually stating and repeating the very very obvious, as in 'It's a nice day', or 'You're very tall', or 'Oh dear you seem to have fallen down a thirty-foot well, are you alright?'"
— The Hitchhiker's Guide to the Galaxy
Advertisement:

Any line in a movie or show that tells us what it was we just saw. "He got away!" "It's a trap!" "They are shooting at us!" You know Show, Don't Tell? This is Show, Then Tell.

Distinct from As You Know in that everyone in the audience and the cast do, in fact, know this.

This is common in children's shows, where it can help the young viewer to make the association between what's being shown and what's being told. It is also seen in Reality Shows, when participant monologues are interspliced with clips of the events they are talking about:

"He started yelling at me." (shot of person yelling)

Possibly a holdover from the days of the Radio Drama, where the medium required characters to describe the action for the audience. This behaviour would tend to make the actors sound really hammy to listeners used to visual media, and many programs would play with and lampshade characters who do this.

Perhaps writers do this because they assume that Viewers Are Goldfish. In media such as older comic books and manga, this tends to go hand-in-hand with Talking Is a Free Action.