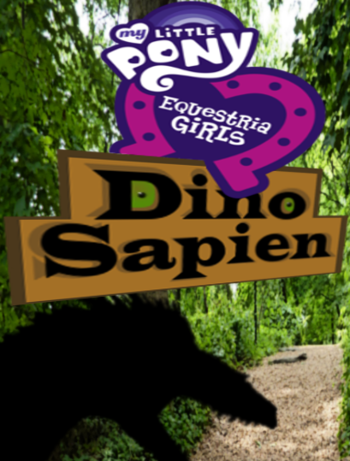 "Eee-no ee-no!"
"Everyone knows dinosaurs are extinct... but what if they're wrong?"
Advertisement:

Maia Search of Canterlot High School, after spending a year in recovery from a gymnastics injury and longer time recovering from grief; goes to her mother's summer camp to serve as a counselor. While there, she and her friends, Babs Seed's older sister Sunflower Orange and nature lover Sandalwood, find themselves wrapped up in a mystery 65 million years in the making. It's between five and six feet tall, covered in feathers, and much smarter than they could have imagined. And it's not alone...

Equestria Girls: Dinosapien is a Fusion Fic written by Tarbtano

and proofread by Faith-Wolff and Lance Omikron, retelling the story of Dinosapien by combining it with My Little Pony: Friendship Is Magic, more specifically My Little Pony: Equestria Girls in The Bridge canon. It takes place between the second and third movies' equivalent events in The Bridge's continuity.

, though the story is still on-going.