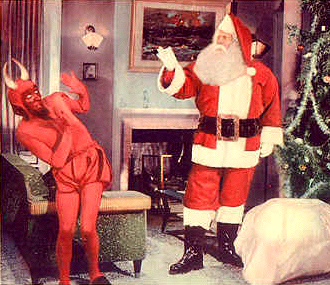 Prepare yourself for a Big Brother Santa Claus fighting the evil forces of prancing demons with the help of child labor and Merlin.

El Santo Claus was directed by Rene Cardona and written by Cardona and Adolfo Torres Portillo. The original film was produced in Mexico in 1959 and features primarily Spanish dialog. It depicts the adventures of Santa Claus in preparation for and during his annual Christmas rounds. Most commercial adaptations of the Santa Claus legend add a distinctive twist to the traditional story, but this film trumps them all with its depiction of an interdimensional Santa doing battle with a demon sent to Earth by Lucifer to ruin Christmas by killing Santa and "making all the children of the Earth do evil." Furthermore, Merlin (yes, that Merlin) serves as Santa Claus' Q, inventing things like The Flower to Disappear for Santa to use.

Believe it or not, there's a good explanation for the film's... unique take on Santa Claus. In the late 1950s, Santa Claus remained an unfamiliar figure in much of Mexico, where holiday gift-giving customs still focused on the Magi and their feast day, Epiphany (January 6). Even today, many discussions of Mexican Christmas customs make no mention of Santa Claus, instead focusing on such traditional holiday elements as posadas and piñatas. Santa has become more popular only in recent decades. Another odd running theme is the focus on social standing and class, which was a major concern of Mexico during that period; see Los Olvidados.

A dubbed and slightly edited English-speaking version was produced for U.S. release in 1960 under the direction of K. Gordon Murray. Santa Claus was considered to be a financial success over several holiday-season theatrical releases in the 1960s and 1970s. Broadcast of the film also became a holiday tradition at several U.S. television stations. The film garnered at least one award, winning the Golden Gate Award for Best International Family Film at the San Francisco International Film Festival in 1959.

A series of shorts by K. Gordon Murray mixed film from Santa Claus with new footage filmed at the various Santa's Village theme parks. These were riffed by RiffTrax as "Santa's Village of Madness". RedLetterMedia's Best of the Worst reviewed the full version of Santa Claus, which Rifftrax also riffed on December 4, 2014; both shows used the full version included Vulcan and other scenes that were edited out of the famous MST3K cut. On December 15, 2020, Trace Beaulieu and Frank Conniff, as part of their "The Mads are Back" series, did a live, on-line riffing of a shortened version of the cut used by MST3K, making this the second of only two movies to be riffed on three times by MST3K and its alumni. (The other being Santa Claus Conquers the Martians, riffed on by MST3K, Rifftrax, and Cinematic Titanic.)

Not to be confused with Santa Claus: The Movie.

For the Mystery Science Theater 3000 version, please go to the episode recap page. It was also reviewed in the 2013 Christmas Episode of Best of the Worst.