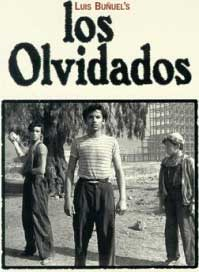 Released in 1950, Los Olvidados (The Forgotten Ones, aka The Young and the Damned) is a film by Spanish-Mexican director Luis Buñuel. It tells the story of a group of extremely poor children, and their struggles to survive in the slums of Mexico City.

Unlike other films of the same period, it makes no attempts to idealize its characters as "poor but with a good heart" and instead shows how the misery surrounding said characters actually contributes to the development of corruption and evil in the young minds.

The story begins when "El Jaibo" escapes from the juvenile jail and reunites with his gang, which consists almost entirely of children. He leads them in criminal activities in order to earn money, but he's also seeking revenge from the person he thinks is responsible for sending him to jail, a young man named Julián. After luring him out of his job, El Jaibo confronts Julián directly but then attacks him from behind and beats him savagely. Pedro, a young boy in El Jaibo's gang, witnesses the incident and is forced to keep the secret after El Jaibo gives him part of Julián's money, making him an accomplice in the eyes of the law. Later, it's revealed that Julián died as result of his injuries, and this sets the start of Pedro's spiralling down into fear and tragedy.

The film was not well received by the government and nationalist critics and had to be taken out of the theaters after only four days. Later, when Buñuel had won the best director award at the 1951 Cannes Film Festival, the film was re-released in Mexican teathers, lasting over two months this time.